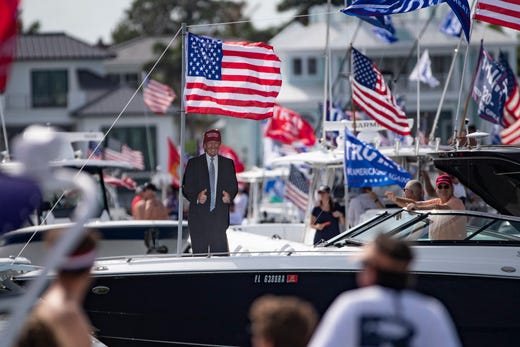 According to Collier County Sheriff's Office over 500 boats sailed the Gulf waters in support of President Donald Trump on Saturday, May 23, 2020, in Naples. The event titled "Making Waves for Trump" was organized by the Republican Club of South Collier County. Jon Austria/Naples Daily News USA TODAY NETWORK - FLORIDA
Fullscreen 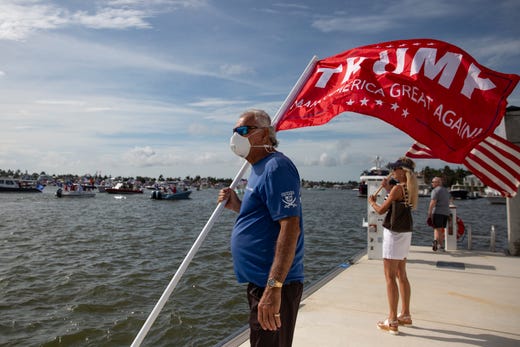 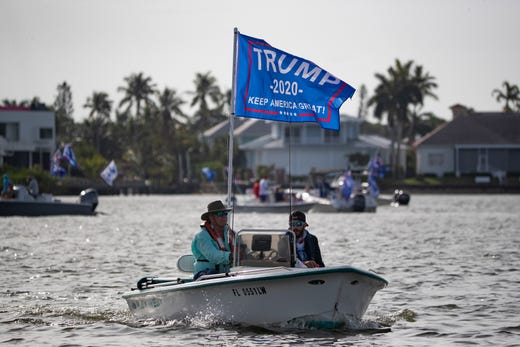 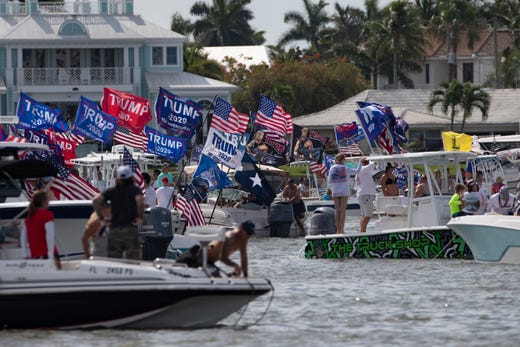 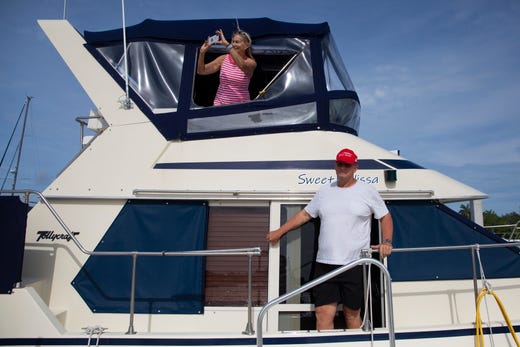 Mike and Barbara Hedberg of Naples watch as boaters gather on Gulf waters to show their support for President Donald Trump, Saturday,, May 23, 2020, from the Naples Dock. The event titled "Making Waves for Trump" was organized by the Republican Club of South Collier County. Jon Austria/Naples Daily News USA TODAY NETWORK - FLORIDA
Fullscreen 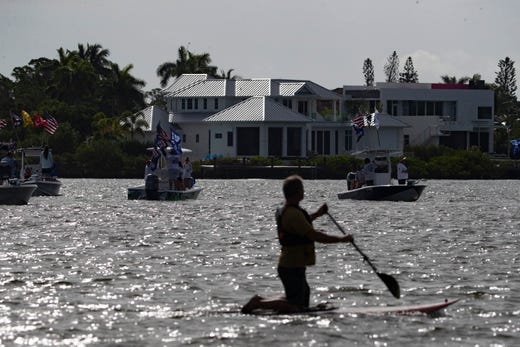 Boaters sail on Gulf waters in support of President Donald Trump, during an event titled "Making Waves for Trump" on Saturday, May, 23, 2020. The event drew about 200 boaters and was organized by the Republican Club of South Collier County. Jon Austria/Naples Daily News USA TODAY NETWORK - FLORIDA
Fullscreen 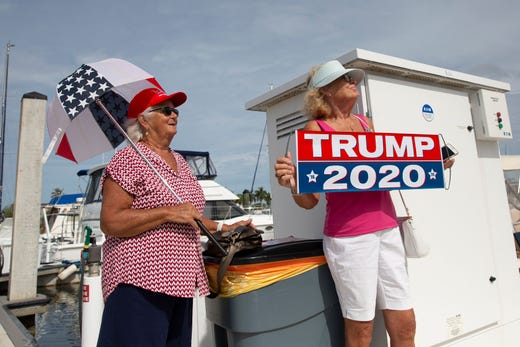 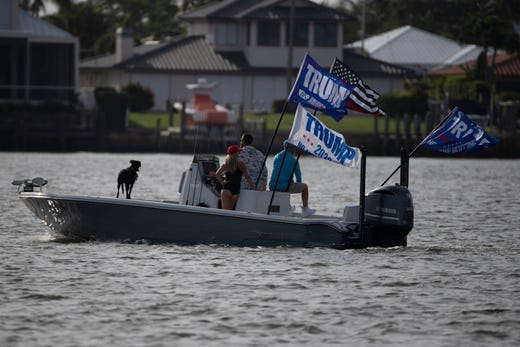 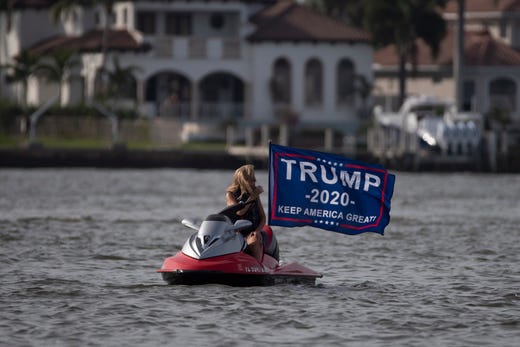 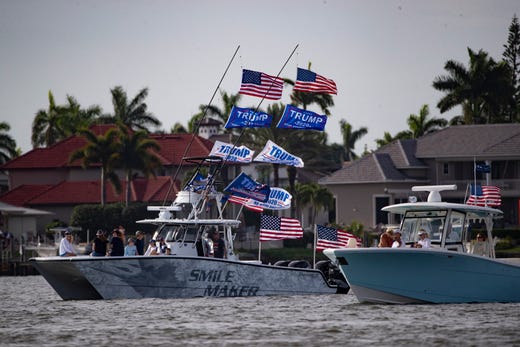 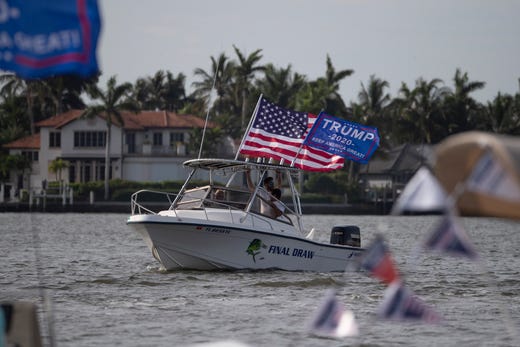 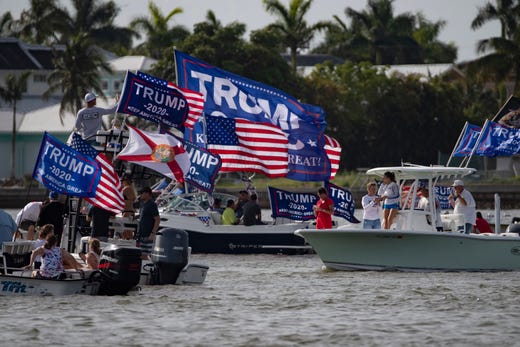 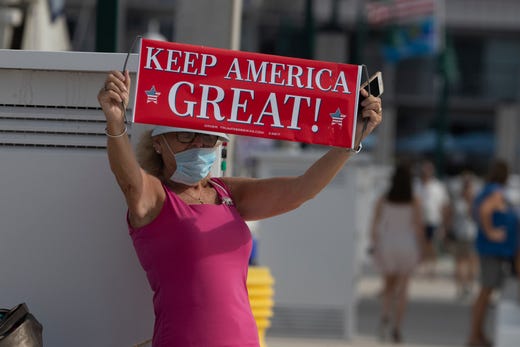 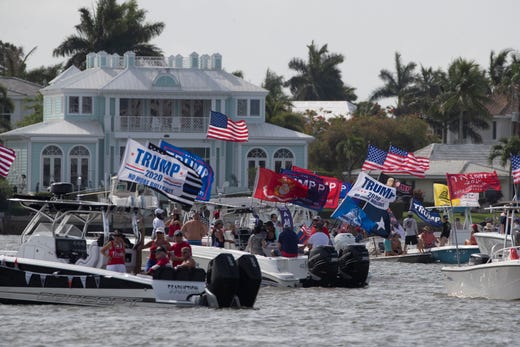 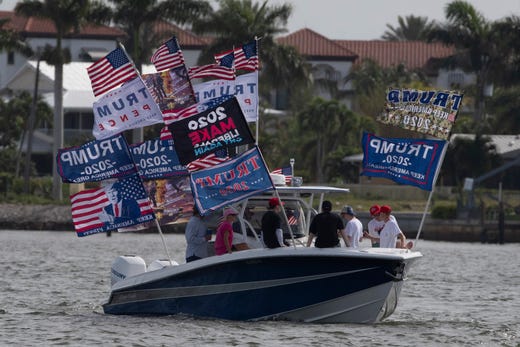 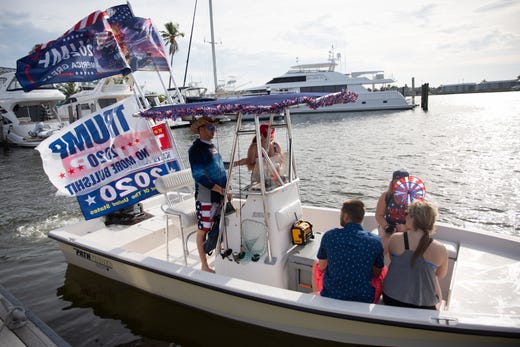 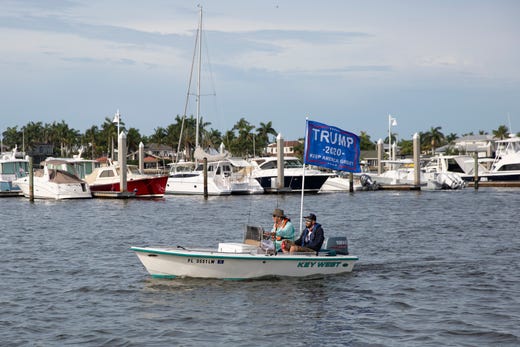 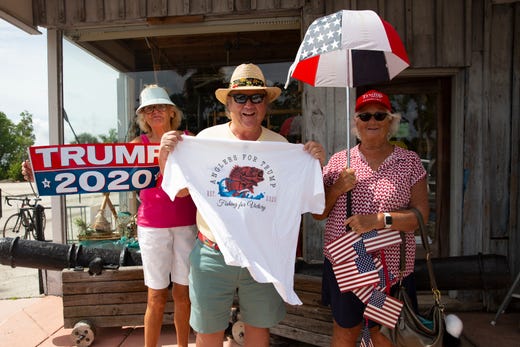 Boaters departed after 10 a.m. from the City Dock in Naples to a recording of the song "God Bless the USA" and the national anthem. They then navigated Naples Bay and farther south to the Jolley Bridge on Marco Island.

About 530 boats participated in the parade, said Jamie Mosbach, a spokeswoman for the Collier County Sheriff's Office.

"We didn't have any incidents," she said.

From a boat filled with her family members, Marco Island resident Doreen Oliverio said that she wants to see Trump win the 2020 general election.

"He is the greatest and can turn our country around," she said.

In other news: Trump coming to KSC to watch historic SpaceX/NASA launch

Carl Oliverio, Doreen Oliverio's nephew, said he came from Calabasas, California, to get away from the state's stay-at-home restrictions, which he called a "lockdown."

He said the media is unfair to Trump.

"He was duly elected, and he should be given a fair chance," Carl Oliverio said.

Steve Loyd, co-organizer of the event, said the parade shows that a majority of Americans back Trump.

"I'm overwhelmed with the support," he said.

Marco resident Angie McGrath was in one of the boats with her wife, Caryn, as they pumped gas at the dock. She said members of the LGBT community back the president.

"Everybody says lesbians aren't for Trump," she said. "We are here to prove them wrong."

Florida: Hundreds of boats 'make waves' for Trump from Naples to Marco Island

"I don't believe in entitlement," he said.

Kim Mitchell, president of the Republican Club of South Collier County, said the parade turned out better than expected.

"Whatever state you are from, we want Republicans (elected), a lot of them," she said.

In addition to the parade, the club hosted a country concert at Dolphin Point on Isles of Capri, where attendees watched the boats to the tune of "Proud to be an American."

Other boat parades in support of Trump recently have taken place in Florida. Trump has thanked participants on Twitter.

"Thank you very much to our beautiful 'boaters.' I will never let you down!" a tweet from his official account states.

Previous coverage: At least 200 boats to 'make waves' for Trump

Also: Florida man at center of Trump boat parade enjoying his day in the sun ... and on the water

Thank you very much to our beautiful “boaters.” I will never let you down! #MAGApic.twitter.com/BiqIqzgOcL