Ravenous swarms of saltwater mosquitoes are blanketing parts of coastal Southwest Florida just as the freshwater species are starting their season.

It's that time again: time to give a little blood back to nature.

Ravenous swarms of saltwater mosquitoes are blanketing parts of coastal Southwest Florida just as the freshwater species are starting their season.

"People are definitely feeling it," said Eric Jackson, with the Lee County Mosquito Control District, which spends about $8 million a year fighting mosquitoes. "We anticipate more mosquitoes in late May or early June as the high tides come in, but what’s different this year is we had such a severe drought. Then we had the tides and heavy rains all at once, so that’s led to massive amounts of mosquitoes emerging from the salt marshes."

Jackson said this year has been as bad as just about any he's seen in the past decade.

The district has been treating for eggs daily and flying airplanes and spray trucks at night for about three weeks. 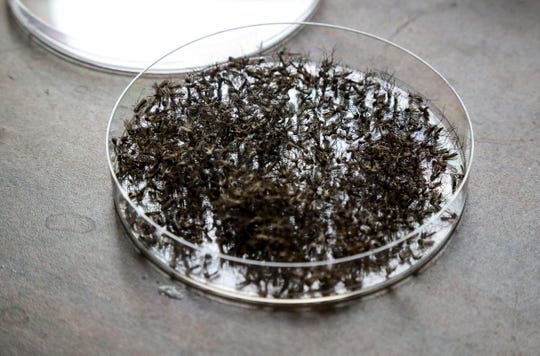 A Lee County Mosquito Control District lab in Buckingham is preparing to release hundreds of thousands of sterilized male Aedes aegypti on Captiva in hopes that they impregnate females with nonviable offspring. This generation of males goes through an X-ray machine and is tested for fertility. The end result are male mosquitos that can't produce offspring, thus slowing down or killing off this specie of mosquito.  (Photo: Andrea Melendez/The News-Press/USA Today Florida Network, Andrea Melendez)

"It’s always busy, but it’s been an exceptional year as far as the number of mosquitoes," he said. "It’s been this bad before but people have called me and said they haven’t seen this since they moved here five years ago. And they haven't."

Salt marsh mosquitoes flood the coast at the beginning of each summer.

They're strong fliers, able to travel up to 60 miles on the winds, and seem to be more aggressive, considered all-day biters, than their freshwater cousins.

The saltwater variety begin to slow down in numbers as the rainy season continues, mostly because the marshes themselves get flooded by daily rains.

"As this rain continues, the salt marshes are going to flood and they’ll stay flooded, and then you actually have less problems with saltwater mosquitoes," Jackson said. "They have to lay eggs on dry ground."

Collier Mosquito Control District is seeing the spike as well.

“We have seen an 80% increase in complaint calls and in the number of field technician visit requests in just two weeks,” Executive Director Patrick Linn said. “When our surveillance data indicates widespread mosquito populations, we plan treatments to target those mosquitoes and provide some relief to residents.”

As of Monday, the district reported it has flown 13 aerial treatments for adult mosquitoes, focusing treatments on where surveillance data indicated their populations were greatest: northern coastal areas, areas near Rookery Bay, and along the East Naples/Henderson Creek corridor.

Inland mosquitoes are starting to make their presence known too.

“As our rainy season progresses, we typically see a shift in mosquito populations as they appear in abundance to more inland areas,” Linn said. “By mid-July, the heavy rains contribute to the area’s rising water table and an increase in standing water. That deluge results in fewer Salt Marsh mosquitoes, but also higher numbers of freshwater mosquitoes.”

Although the brunt of the freshwater breeding season is still to come, people in the LaBelle area, along eastern stretches of the Caloosahatchee River, are feeling the sting.

"They’re coming on here as well," said Gene McAvoy, with the University of Florida's agriculture extension. "We had quite a bit of rain last week, and it usually takes about five days for them to come out. I was just outside (Monday) at 4:30 and they were chewing on me pretty good."

McAvoy said rural areas like LaBelle and Hendry County often see more of the pests because they don't have mosquito control districts to treat for eggs and spray adults.

"It’s pretty typical when you start getting rain and standing water," McAvoy said. "In the rural areas we don’t have routine spray trucks or planes."

Freshwater species in developed areas are of particular concern because they can transmit diseases like West Nile Virus, St. Louis encephalitis and Dengue fever.

West Nile has been one of the more common viruses to appear in Florida in recent years.

The Florida Department of Health reported the third and fourth cases of West Nile virus this year on June 11.

Health officials said the infections were in Miami-Dade County, and the state has issued a mosquito-borne illness alert there.

"Most people infected with West Nile virus do not feel sick," reads a Florida Department of Health report about mosquito-borne viruses. "About one in five people who are infected develop a fever and other symptoms such as headache, pain, and fatigue. People with mild illness typically recover within about a week with symptomatic treatment."

Less than 1% of those inflicted with West Nile develop serious conditions, even death.

The state health department issued 26 mosquito-borne illness alerts in 2019 in various counties, according to DOH records.

Collier district officials say the public can help reduce mosquito populations by emptying anything than can hold standing water around their property because that’s where mosquitoes lay eggs. It only takes mosquito eggs about five days to hatch so water should be drained weekly. If residents must be outdoors, avoid the mosquitoes’ peak hours from sunrise to sunset, wear protective clothing, and use mosquito repellent, such as DEET, as recommended by the Environmental Protection Agency.