There also have been further incidents of aggressive behavior, his mother reported.

This is a six-month review of the most-read crime stories in Collier County on naplesnews.com from September 2018 to February 2019. Wochit

Six months after a Marco Island man escaped prosecution stemming from an armed standoff with police, issues continue to emerge over his mental welfare and alleged violent outbursts.

Through a risk protection order, police have been able to hold on to about 25 pistols and rifles they said Tremont had in his possession during the standoff, court documents indicate. However, Tremont has not sought mental health treatment even after being hospitalized involuntarily under the Baker Act. A temporary no-contact order with his mother was issued two weeks ago. 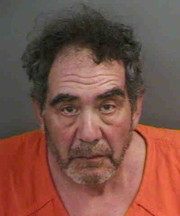 Peter Tremont, 61, was arrested Sunday night and charged with aggravated assault after barricading himself at his home on Marco Island. (Photo: Courtesy of the Collier County Sheriff's Office)

Marco Island police were called in late December to a home Tremont shared with his mother, Mary, after she said he threatened her while holding a gun. Police officers arrived and saw Tremont peering around a wall and saying, “Come in. I’ve been waiting for you. You’re here to kill me, so I will kill you,” an arrest report states.

Tremont was released from jail almost three weeks after his arrest.

Police  are holding the weapons and about 8,000 rounds of ammunition through a risk protection order, which stipulated Tremont was required to have both a mental health and chemical dependency evaluation. He has not produced any evidence to support that either had been completed.

An affidavit filed in mental health court states police again were called to the Tremont residence May 29 in response to a disturbance. Officer Edward Carey wrote in the affidavit that Tremont’s mother had advised police that she had gotten into an argument with him and that he moved toward her aggressively.

Officers reported finding Tremont in a back room in the home.

“I’m ready to die. How about you?” Tremont said, the officers reported.

He also said multiple times that he was going to take one or two officers with him when he died, the officers reported.

More: Report: Barricaded Marco man told cops ‘they were going to leave this world with him’

Tremont then barricaded himself in his room, which led to another standoff with officers.

Officers ended the standoff after four hours when they distracted him and placed him in custody.

While restrained, Tremont said, “Take these handcuffs off, pull out your guns and finish me,” the officers reported.

Officers used the Baker Act on Tremont again and took him to the David Lawrence Center, a mental health treatment facility in East Naples.

Acting Police Chief Dave Baer said he was not placed under arrest despite making threats similar to the previous incident because of “the specific call as well as prior calls, the subject’s history, prosecution value (and) likelihood, and related mental health concepts.”

Despite the involuntary mental evaluation, Tremont was released again, leading to the latest incidents.

Tremont’s mother filed for a protection order against him two weeks ago after reporting another outburst.

In her petition, Tremont’s mother wrote about a few incidents. In one, he grabbed her by the neck and her hand got caught in a sliding door, breaking blood vessels, she said.

More recently, she wrote that he removed a for-sale sign from her property and broke several items in the house.

Tremont’s mother wrote that she previously asked him to leave but that he instead asked her to leave and give him money.

When reached by phone, she deferred questions about any treatment to Tremont.

She wrote in her petition that the problems seemed to occur a few months after Tremont’s brother died and he suffered from a case of sepsis.

According to information from the Mayo Clinic, sepsis has been linked to altered mental states, including periods of delirium.

More: Immokalee man arrested on suspicion of grand theft auto linked to slew of other burglaries

More: Naples man accused of trying to bribe a deputy, using racial slurs after arrest on suspicion of DUI