A former YMCA youth tennis instructor in Marco Island  was sentenced to life prison Tuesday for sexually battering a victim younger than 12.

This is a six-month review of the most-read crime stories in Collier County on naplesnews.com from March 2019 to August 2019. Naples Daily News

A former Collier County youth tennis instructor was found guilty and sentenced to life prison Tuesday for sexually battering a victim younger than 12, according to the state attorney's office.

He was sentenced to life prison as well as 25 years in prison to be served concurrently. 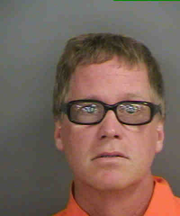 Pearson was sentenced to lifetime sexual offender probation on both of the lewd counts and was found guilty following a trial in Collier County in January.

The defendant raped two young girls and was a family friend of the victims, according to the state attorney’s office.

Pearson was arrested in 2016 following an investigation by the Marco Island Police Department.

Marco Island Police Department officials said they received calls from law enforcement officers in Michigan informing them that children who stayed with Pearson in the past reported that he touched them inappropriately.

One of Pearson's victims was a young girl who said he showered with her and inappropriately touched her while she was staying with him, according to court documents. She said he also slept naked with her in her bed.

The documents also state that Pearson would force other young girls to touch him and that he was the former guardian of at least one of his victims.

Pearson first began teaching youth tennis through the Ypsilanti Parks & Recreation Department in Michigan, where his position quickly grew from an assistant position to a leadership role.