A former Marco Island officer tied to the police department's sex on duty scandal will be allowed to keep his law enforcement certification.

A former Marco Island police officer tied to the department’s sex on duty scandal will be eligible to join another law enforcement agency after reaching a stipulation and settlement agreement with the state’s Criminal Justice Standards and Training Commission.

Neil Giansanti resigned from the police department last year while under investigation for having sex on duty. The charges were sustained after an internal affairs investigation unearthed a 45-second video of Giansanti putting his uniform back on while standing next to his police car and a woman putting her hand through his pants' zipper.

The commission, which holds the power to impose discipline from probation up to revoking an officer’s certification for moral character violations, issued a final order agreeing to a 60-day suspension and one year of probation. The suspension started on Dec. 6.

Moral character violations are defined by state statute and include, but are not limited to, the adjudication of guilt for felony offenses, some misdemeanor crimes such as theft, as well as instances of dishonest behavior or bias. The definition also includes sex on duty for which the penalty can range from suspension to revocation of an officer’s certification.

Giansanti previously had been listed under the officer discipline portion of the commission’s May agenda as an officer who had relinquished his certification. The new agreement does not assign an admission of guilt.

Giansanti stipulation and settlement agreement by Devan Patel on Scribd

Giansanti was one of three now-former officers investigated for engaging in sex while on duty.

The investigation first began with then-Sgt. James Inlow after the father of a woman Inlow was sexually involved with came forward with evidence that he was sexting and soliciting Adderall from her while on duty.

While Inlow resigned under investigation, the police found a treasure trove of evidence to support the charges against him after performing a forensic examination of her phone and computer. The commission revoked Inlow’s law enforcement certification earlier this year.

The evidence uncovered from the woman’s devices was just the beginning of the scandal as Giansanti and officer Kevin Hennings, who was fired last September, were also implicated for the same offense. A fourth officer, Brian Granneman, was reprimanded for knowing of Inlow's actions but not reporting it to another supervisor. 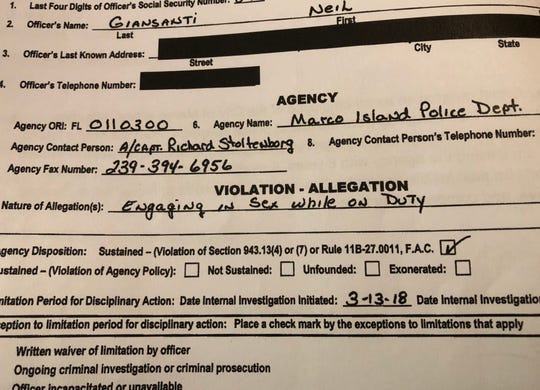 The woman, who was separately involved with all three officers, made a recording of one of her encounters with Giansanti on April 4, 2017. A shift report showed Giansanti was assigned to work between 6 p.m. April 3, and 6 a.m. April 4.

Giansanti’s boots are off and he’s tucking his shirt into his trousers before the woman slides her hand through his unzipped fly.

At the time, the department could not track its vehicles through GPS, but a timestamp and GPS location attached to the video put the incident in the parking lot of the Family Church of Marco Island at 1:53 a.m.

A log of Giansanti’s activities show he responded to or initiated eight incidents but none between 1:19 and 2:39 a.m.

The incidents that bookended the inactive time were either at or near the Family Church of Marco Island.

The woman participated in an interview with investigators and told them she and Giansanti had sex while he was on duty about 20 times over the course of eight months, including in his squad car and at the ballfield on Winterberry Drive.

Giansanti resigned from the department on the day after the woman’s interview.

He was also named as a prospective respondent in a lawsuit the woman is threatening to file against the city and all of the officers involved.

A draft of the seven count complaint that was sent to the city alleges multiple violations of the Trafficking Victims Protection Act and battery for physical, psychological and sexual abuse.

It delves further into the conduct of Inlow, Giansanti, Hennings and Granneman and accuses them of using their status to prey and capitalize the woman's "fragility, vulnerability and instability for their own self-gratification, and aided and abetted one another in said venture."

Local and federal court records show no lawsuit has been filed to date.