Plans for a new town have been shelved, but now developers are proposing four smaller villages.

Growth in rural Collier County could be taking a new form.

Large swaths of undeveloped land east of Golden Gate Estates, including 4,000 acres once slated to be a new town, might be transformed into a group of smaller villages, a move that has drawn concern from some environmentalists.

Arguing that bureaucracy and "economic overreach” by the county had forced its hand, Collier Enterprises earlier this year withdrew its Rural Lands West application for the new town. That project off Oil Well Road, east of Golden Gate Estates, would have included up to 10,000 homes. It could have had up to 1.9 million square feet of commercial development. 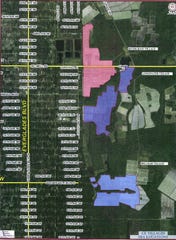 Instead, the company has put together plans for three 1,000-acre villages, stretching from just north of Oil Well Road to east of Golden Gate Boulevard East and potentially adding up to 7,850 homes to the rural area:

Rivergrass Village is under review by county staff and is expected to come before the Collier County Planning Commission Sept. 19. The county has not yet received any applications for Longwater and Bellmar villages, but pre-application meetings were held last month, according to county records.

A fourth village, called Hyde Park, is also under county review. The proposed 655-acre village, one mile east of Everglades Boulevard on the north side of Oil Well Road, is a project by Neal Communities of SWFL, LLC. It would include up to 1,800 dwellings, 45,000 square feet of retail/office space, and 18,000 square feet for civic uses.

All four villages sit within the 185,000-acre Rural Lands Stewardship Area, where a voluntary program allows landowners to build towns and villages with shopping centers, schools and businesses in areas with low conservation value using credits earned by giving up their rights to develop more environmentally sensitive land.

The program is now undergoing a review by county officials who are looking to improve it. Commissioners are expected to take it up this fall.

For Collier Enterprises, the move from town to villages was in part motivated by a more compact timeline and a reduction in costs.

Whereas planning for a town looks 20 or 30 years into the future, villages are smaller in scale and plans look closer to 10 years out, said Patrick Utter, senior vice president of real estate for Collier Enterprises.

“It’s much easier to plan the horizon,” he said.

More: New 'towns' pop up on rural land around Florida

That includes planning for roads, water, sewer, parks and emergency services. With Rural Lands West, the company had to “overbuild” certain infrastructure, Utter said. Major four- to six-lane roads, for instance, were needed to serve the project, driving up costs.

Aside from the fact that Rivergrass would include a golf course, Collier Enterprises' proposed villages are fairly similar, he said. The new communities will aim to provide goods and services not just to its residents but also to nearby Golden Gate Estates, Utter said.

Utter said the company thinks the project will supply the market with a price range "that's hard to find" in Collier.

With the reduction in development footprint, the acreage slated for preservation has also shrunk.

Development of the town would have required preserving more than 12,000 acres of agriculture, wildlife habitat and environmental flowways. It also would have restored more than 900 acres of farm fields to wetlands and habitat.

The proposed villages will set aside 10,000 acres for preservation, Utter said. Some of it will include restoration, but less than what was proposed for the town.

"We're repurposing land that's been farmed for decades," he said.

More: Gabriel the pit bull suffered severe burns and broken bones. A Bonita Springs vet and a dog rescue are giving him a second chance.

Conservancy: 'This is an absolute disaster'

The proposed villages have been met with concern from some environmental groups.

“These are the areas that best available science says development needs to be directed away from,” said Nicole Johnson, director of environmental policy for the Conservancy. “So environmentally, this is an absolute disaster.”

Johnson said the proposed development is “nothing more than absolute, massive urban sprawl.”

“Instead of having a cohesive new town, you have all of these smaller villages that are being brought in, I assume to avoid the infrastructure that new towns require,” she said.

To Johnson, the projects exemplify the “fundamental failure” of the RLSA. The intent of the program was to create self-sustaining communities, she said.

“And if less services, infrastructure, mix of communities and uses can be achieved through a series of villages instead of doing an actual town, from a planning standpoint, that’s very concerning,” Johnson said.

For both Rural Lands West and the new proposed villages, the location is inappropriate, said April Olson, a senior environmental planning specialist with the Conservancy.

The Conservancy supports a recommendation made by county staff in a white paper on the RLSA to create an “aggregation rule for villages,” Olson said.

“What they’re saying is if you have a lot of these smaller villages that are adjacent to each other or very close to each other and under a common ownership, then … that project should apply to town standards, the stricter standards for towns,” she said.

Less preservation, not as quickly

Cornell said Audubon does not support Belmar Village because it is too close to the Florida Panther National Wildlife Refuge, but he said the other two villages will generate “good conservation benefits.”

Meredith Budd, Southwest Florida field representative for the Florida Wildlife Federation, said the newly proposed villages also highlight the importance of moving forward with the county’s review of the RLSA.

Although there has been broad agreement that the credit system should be recalibrated to make sure more credits are needed for development — thereby preserving or restoring more land — none of the proposed changes have been implemented, she said.

The new villages will presumably be grandfathered into the existing credit system, Budd said.

She agreed that Belmar Village’s proximity to the Florida Panther National Wildlife Refuge is problematic.

Not only would it cause more wildlife-human conflict, Budd said, but it would also create a potential problem with conducting prescribed burns with homes that close to the refuge.

“It presents a real challenge,” she said.

Connect with the reporter at patrick.riley@naplesnews.com or on Twitter @PatJRiley.