Prager speaks at Rookery Bay’s ‘Tales from the Coast’

Prager speaks at Rookery Bay’s ‘Tales from the Coast’

Marine biologist and science educator Ellen Prager signs books after her talk. Prager spoke at the Rookery Bay Envioronmental Learning Center on Feb. 9 as part of the "Tales from the Coast" lecture series.(Photo: Lance Shearer/Correspondent)

We tend to focus on the beauty and splendor of ocean life, and Ellen Prager’s talk at the Rookery Bay Environmental Learning Center provided a healthy dose of that. But before she spoke in the auditorium, guests enjoying the open bar and heavy hors d’oeuvres had the chance to see a real-life, life or death maritime struggle playing out before their eyes.

In the Rookery Bay touch tank, a horse conch was slowly devouring a lightning whelk, the foot-long conch (Florida’s state sea shell) enveloping the smaller whelk within its bright pink mantle. The tableau was just one more example of the fascinating displays at Rookery Bay’s ELC, although unfortunate for the lightning whelk.

In her talk, Prager took the capacity crowd on a journey of her life spent researching, documenting, educating and writing about our oceans and the life they contain. The Ph.D. marine scientist, based out of St. Petersburg, Florida, lives on, for, and sometimes beneath the ocean, taking on a multitude of roles in her quest to understand and preserve our largest natural resource.

The author of numerous books, both fiction and nonfiction, focusing on the underwater world, Prager has served as educator, researcher, consultant, government advisor, public speaker and Galapagos tour guide. She is science advisor to Celebrity Expeditions in the Galapagos Islands, working with their onboard naturalists, and has lost track of how many trips she has taken there.

“Something over 20,” was the closest guess she could muster, but clearly she still feels the wonder of that unique environment. “It’s the most amazing place – you’re swimming with sharks, sea turtles, and tropical fish, and the next thing you know, a penguin swims by.” Tourism has helped to preserve, rather than harming the Galapagos, said Prager, as the Ecuadoran government tightly controls activities on the islands so as not to lose the crown jewels of their eco-tourism program.

Marine biologist and science educator Ellen Prager talks about being a consultant for Disney's "Moana." Prager spoke at the Rookery Bay Envioronmental Learning Center on Feb. 9 as part of the "Tales from the Coast" lecture series. (Photo: Lance Shearer/Correspondent)

In addition to the Galapagos, Prager’s researches have taken her to the Caribbean, the Bahamas, Papua New Guinea, and the close by waters of the Florida Keys. She was resident director of the National Undersea Research Center in the Bahamas, and in Florida, was assistant dean of the University of Miami’s Rosenstiel School of Marine and Atmospheric Science, where she had earned a master’s degree before obtaining her Ph.D. from Louisiana State University.

Fittingly enough, a career highlight involved “getting down” and spending extended periods of time underwater. As chief scientist for the Aquarius Reef Base in Key Largo, Prager twice had the chance to spend weeks living in their underwater habitat.

“It’s amazing – you get six to nine hours a day to dive down to 100 feet,” and don’t have to spend time decompressing. The food in the module was Spartan – no open flames allowed in the pressurized atmosphere – but “your taste buds don’t work, anyway. Everything tastes really bland. Someone sent us down a lemon meringue pie, but it just turned into white slime and yellow goo.” 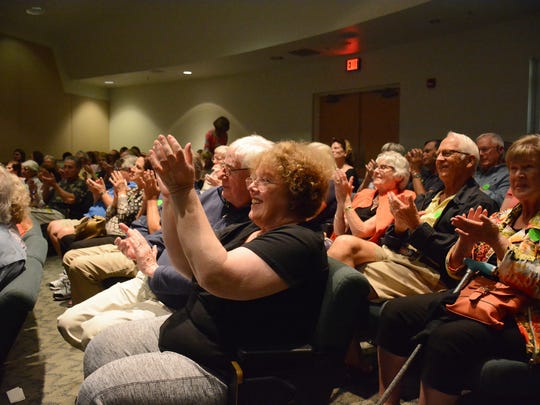 The audience applauds marine biologist and science educator Ellen Prager's talk. She spoke at the Rookery Bay Envioronmental Learning Center on Feb. 9 as part of the "Tales from the Coast" lecture series. (Photo: Lance Shearer/Correspondent)

“Slime” is not necessarily a pejorative coming from Prager. She wrote a popular science book for adults, “Sex, Drugs, and Sea Slime,” which reviewers called “hilarious, tastefully salacious, and fascinating,” and one of her books for young readers is titled “Sea Slime: It’s Eeuwy, Gooey, and Under the Sea.”

Prager wrote a marine-themed series for middle school readers, beginning with “The Shark Whisperer,” featuring kids taking on ocean-themed mysteries. In them, bad guys sometimes fall prey to ocean predators including sharks and also the diminutive mantis shrimp, which has the fastest, most powerful strike in the animal kingdom, capable of breaking the glass wall in your aquarium.

Prager has built a national reputation as a scientist and spokesperson on earth and ocean science issues and is a sought after speaker for public-oriented events. She has appeared on “Today” and NBC News, “Good Morning America,” Fox News, CBS’ “The Early Show,” CNN “American Morning,” Larry King, The Weather Channel and in shows for the Discovery Channel. Recently, she was a consultant for the animated Disney film “Moana.” 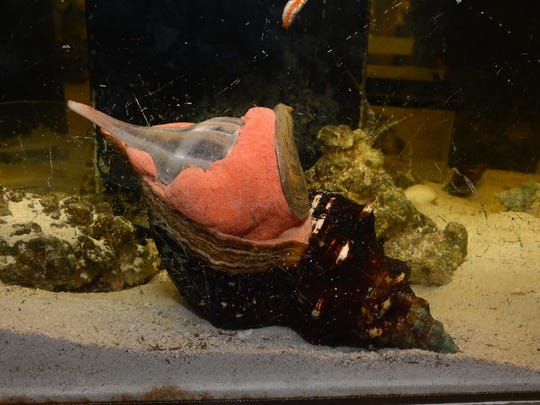 She was introduced by Friends of Rookery Bay executive director Gary Lytton, former Rookery Bay Reserve director. He informed the audience the lecture was being “live streamed” to a national audience, some of whom texted in questions that Prager answered. Online and in person, the audience was fascinated by the Galapagos, and asked practical questions about visiting. In response, Prager said she (admittedly biased) feels going by ship is preferable, allowing you to get to more remote islands, and the best time to visit would skirt February and March, when it is hottest, and the cold months of June and July. After she spoke, Prager signed copies of her books for purchasers.

To learn more about visiting Rookery Bay, join FORB or make reservations for their upcoming “Batfish Bash” gala, call the Rookery Bay Environmental Learning Center at call 239-530-5940, or visit rookerybay.org. Rookery Bay’s ELC is located at 300 Tower Road, just off Collier Blvd. south of US 41 between Naples and Marco Island.