On Tuesday the Collier County Board of Commission approved an agreement with the Smithsonian Institution for a loan of the Key Marco Cat.

The Key Marco Cat is the most well-known artifact recovered in Cushing's expedition, and arguably one of the best known anthropological artifacts ever discovered.(Photo: Courtesy of the Marco Island Historical Society)

When Austin Bell joined the staff of the Marco Island Historical Museum in 2014, he had many goals, but one of his biggest was to bring the Key Marco Cat, a priceless artifact on display at the Smithsonian in Washington, D.C., back to the island. Now, four years later, his dream is finally a reality: the cat is coming back.

On Tuesday the Collier County Board of Commissioners unanimously approved an agreement with the Smithsonian Institution for a loan of the Key Marco Cat, a significant relic of Marco Island’s earliest settlers, the Calusa.

The 6-inch, part-human, part-feline sculpture was pulled from the mud during archaeologist Frank Hamilton Cushing’s 1895-96 excavations around Marco Island. It is believed to date some 1,000 years. It, and other evidence from the dig, helped shape the perceptions of early Native-American societies and has been described as one of the finest pieces of prehistoric art ever discovered in the Eastern coastal states.

Bell, the museum's curator of collections, saw the artifact in person for the first time in 2015.

"When the woman picked up the box containing the Marco Cat, I thought about all the places I had seen it over the years, in books, artwork, jewelry, signs, replicas like outside the museum," Bell said in a previous interview. "Seeing the Key Marco Cat in person was more emotional than I thought it would be. I mean, it's only 6 inches tall, but it commands such respect. It means so much to so many people. It was surreal to see it face to face. I just feel fortunate to be tasked with pursuing it on loan – talk about a meaningful pursuit."

Since then, Bell and the members of the Marco Island Historical Society have worked diligently to raise the funds needed to secure the artifact; specifically, the museum needed money to build a display case to the specifications of the Smithsonian.

All materials inside the case, including the air, paint, fabric, and glue, must be tested for gases that might leech into the wood and damage the artifact, according to previous reporting. Extra security will also be added to protect the artifact, which has an estimated value of $500,000. 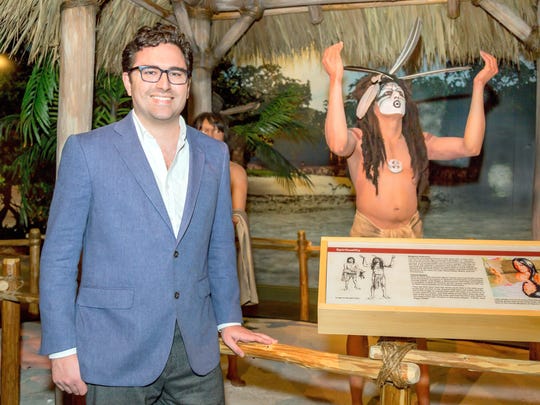 In addition to the Key Marco Cat, the museum will receive four items through a separate agreement with the University of Pennsylvania, another repository of the artifacts uncovered by Cushing.

They include a mask and an alligator figurehead. Many of the artifacts found in the 1895-96 expeditions disintegrated soon after being exposed to air; the relics headed to Collier County are exceptions, Bell said.

Altogether, the relics paint a picture of a society that was far more complex than first thought, especially when it came to their artistic acumen.

“These things were beautifully, masterfully painted. It gives a broader understanding of the culture.”

“These things were beautifully, masterfully painted. It gives a broader understanding of the culture,” Bell said in a previous interview.

The last time the Smithsonian lent out the cat, it was at the Collier County Museum for about six months in 1996.

The Key Marco Cat will be on display at the Marco Island Historical Museum from November 2018 until April 2021.