City of Marco left with one city manager finalist

The appearance of a default city manager has left a bad taste in the mouths of some residents, but city leaders are defending the selection process.

City of Marco left with one city manager finalist 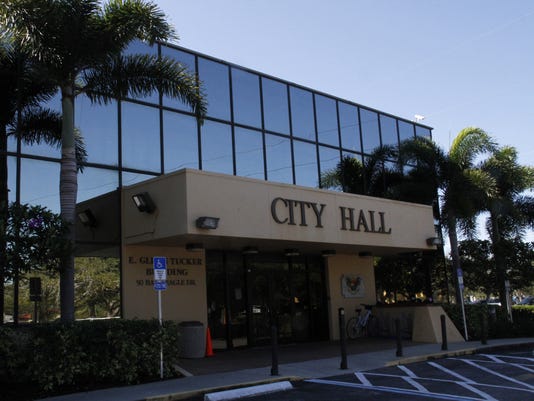 The search for a new city manager began in April following the sudden resignation of then-city manager Roger Hernstadt. The Marco Island City Council selected The Mercer Group, Inc. to conduct the search and started accepting applications on May 15.

W.D. Higginbotham, Jr. of The Mercer Group, Inc. presented the councilors with a list of seven city manager semi-finalists during a special workshop on June 20. By the end of the evening the councilors selected Joshua Gruber of Beaufort, S.C. and Anthony Hamaday of King of Prussia, Pa. as the finalists.

Hamaday has since withdrawn his candidacy, making Gruber the sole finalist.

The appearance of a default city manager has left a bad taste in the mouths of some Marco residents, who have recommended that the councilors pause the selection process until they've had a chance to choose more finalists.

"It is my understanding that the process of interviewing candidates for Marco Island City Manager has hit a bit of a snag," Marco Island resident Russ Colombo wrote in a letter to the editor published in the July 14 Eagle. "Being hired by default instead of by competitive selection should be unacceptable to anyone, including the candidate. The appearance of a 'fix' is just as damaging to everyone involved as would be hard evidence of one.

"In the interest of fairness to the Marco Island community, City Council would be well advised to delay the above process and request one or more additional candidates be provided by the consultant prior to continuing the selection process," he continued.

“To bring back candidates who have already been rejected would be odd. Or political theatre. And unfair to the candidate who did make it through the process.”

"Some have said that City Council should at this point ask to see additional candidates. In my view, such a request would upend the process," Honig wrote in a letter to the editor, published in the July 14 Eagle. "We have already gone through the list. To bring back candidates who have already been rejected would be odd. Or political theatre. And unfair to the candidate who did make it through the process.

I cannot speak for my colleagues, but I can assure the community that I will not vote for a candidate simply because he or she is the 'last one'," he continued.

"The addition of 'secondary' candidates at this time would be inappropriate based on the process agreed to and frankly would be problematic," he wrote in a guest commentary in the July 14 Eagle. "Being a last minute 'throw-in' candidate to increase the number of finalists because someone else withdrew wouldn’t instill much confidence or project professionalism. In fact, it would be entirely unfair to apply a 'special standard' for a last-minute candidate that would be different than what was applied to all candidates throughout the search." He also said he believes some residents are using Hamaday's withdraw to further their own political agendas.

"While there certainly are citizens with legitimate questions that should not be disregarded, the reality we face is that there are some in the community who are trying to manipulate this process for their own personal or political satisfaction," he wrote. "Many of those individuals happen to be closely tied to prior councils and/or city managers and would rather sacrifice the goodwill of the City of Marco Island to create confusion and 'special treatment' for some."

Gruber was the first of the two finalists to advance to the final round, and the only one to do so with a unanimous vote.

Gruber is currently the Deputy County Administrator and Special Counsel for Beaufort County, S.C. Prior to that he served as Assistant County Attorney of Berkely County, S.C. He was also recently considered for the position of Fort Myers Beach town manager, a job that ultimately went to Hernstadt.

Gruber and his wife will be attending a public meet-and-greet at 5:30 p.m. July 18 at Mango's Dockside Bistro. The councilors will then publicly interview Gruber on July 19 before making their final decision that night.