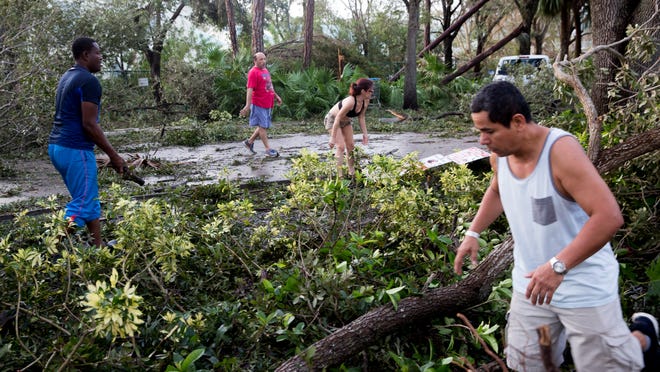 Note: An earlier version of this article had Kranz's first name as Dixie.

The Calusa Indians chose Marco Island as their burial ground because they believed it was a magic island impervious to hurricanes. While that may have been true at some point in time, there’s no doubt that Marco’s magic has run out.

Hurricane Irma made landfall on Marco Island on Sunday, causing extensive damage to the area. As of Monday morning the entire city had no water or electricity, and a major electrical transmission was down, according to the Marco Island Police Department (MIPD.)

Marco Island Fire-Rescue Chief Mike Murphy estimated the island was hit with 3 to 4 ft. storm surges; although a far cry from the predicted 15 ft. storm surges, it was still enough to create a dangerous situation for residents.

MIPD Capt. Dave Baer confirmed that there are parts of the island, like Barfield Drive, that had 1 to 2 feet of standing water after Irma passed Sunday night.

Marco Island City Council Chair said the National Guard has been called in to assist with search and rescue missions for the residents who decided to stay on the island.

"We asked citizens who wanted to stay to let us know their physical addresses, so that we could check on them post storm," Honig said. "(Sunday night) we rescued many of them. For example, seven persons were rescued from a house on Lamplighter Drive," which is straddled by canals.

About 16,500 permanent residents live on the island, and officials estimate that 3,000 to 5,000 people chose to stay during the hurricane.

The next morning the police were restricting access to the island while they conducted a full damage assessment.

“The city is exceptionally concerned for the well-being and safety of its citizens, and as such is restricting access to the island until a full damage assessment sweep has occurred,” a news release stated. “Rest assured we are trying to keep this restriction to the minimum time frame necessary.”

Due to the restricted access, the city was quiet Monday morning, with media vans, police cruisers and power trucks seemingly the only vehicles on the island.

Some of the residents who had chosen to ride out the storm on the island could be seen milling about, taking photos of the wreckage and speaking in low hushed tones as if at a funeral.

Wayne Ploghoft, who’s turning 61 on Friday, is one of the islanders who stayed.

“I’m on the third floor so I knew I would be okay here,” he said.  “I decided that all we will get is just a lot of wind and rain, and being up high in a building was not going to be so bad. I'm glad I stayed rather than run."

Ploghoft resides at Angler's Cove condominiums, where several kids were enjoying the pool late Monday morning, seemingly celebrating both the end of Irma and a week without school. Behind them, though, was a stark reminder that the fun comes at a cost; the Dolphin Tiki Bar & Grill, a Marco Island staple, was in ruins.

The chickee bar’s roof was demolished, some of its siding was gone and the dock in front of it was crooked and missing planks.

"It's gone, man," one Marco resident said, shaking his head while walking past the bar. "It's just freaking gone."

Although there was no shortage of downed trees, power lines and other debris around the island, many of the city’s roads remained easily accessible, including major roads such as Collier Boulevard and San Marco Road leading to Goodland, where Irma’s destruction was even more apparent.

If Marco was quiet after Irma, then Goodland – the nearby fishing village – was a ghost town. The only sounds heard throughout the small community were the groaning, clanking and creaking of damaged homes.

Most of the homeowners had apparently heeded the county’s mandatory evacuation order, and were remaining off-site until they received word that it was safe to return; however a handful had returned as soon as they could to assess their situations, which for some, provided much-needed relief.

It was a close call, though, at least for the Hackett’s personal property; a large tree fell just feet from their house, sparing them from irrevocable damage.

“We got lucky. So, so lucky,” he said, especially since the couple doesn't have house insurance.

Jacki Kranz, owner of Goodland’s famous Pink House Motel, wasn’t so lucky; she lost portions of both her business and her home.

“The roof blew off the motel and some of the windows broke, so water came in and now there’s two inches of mud throughout,” she said. “That alone is a huge challenge because I don’t have running water to hose it down.”

Kranz has lived in Goodland since 1957. Just three years later, Hurricane Donna hit and she evacuated to a shelter in Naples. It was a mistake she wouldn’t make again.

“The roof blew off the shelter,” she said, “so I would have been better off staying at home.”

That’s exactly what she did this time around.

Still, for all the wreckage, it's nothing the Goodland community can't tackle together.

"Goodland is tough," Hackett said, "and we come together like no other community I've lived in."