MIPD sergeant: “We thought we were going to leave here in 10 feet of water.”

“We thought we were going to leave here in 10 feet of water,” MIPD sergeant Mark Haueter said, “so we had six Jet Skis sitting out back ready to go.”

MIPD sergeant: “We thought we were going to leave here in 10 feet of water.”

"This was the worst storm I've worked on," said Marco Island Police Department officer Emilio Rodriguez, who's been a firefighter/police officer in Florida for 30 years. Hurricane Irma made landfall on Marco Island on Sunday, Sept. 10, 2017. 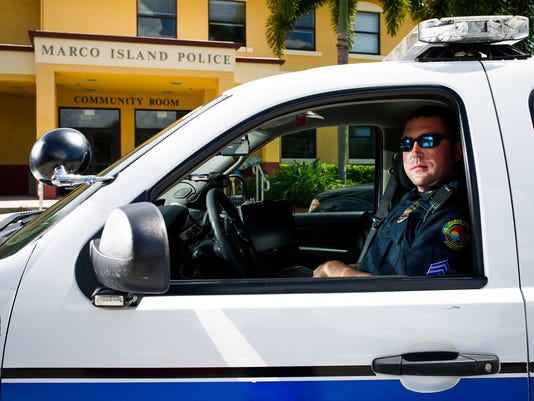 Editor's note: This is the first of a two part series on the experiences of Marco Island's first responders during Hurricane Irma. The next installation will be in the Tuesday, Oct. 3 Marco Eagle.

For three days Mark Haueter couldn’t get in touch with his 8-old-daughter in Alabama. He couldn’t tell her that her daddy had survived one of the biggest and fiercest hurricanes in Florida history, or reassure her that everything was going to be okay and they would see each other again soon.

That’s because when Hurricane Irma made landfall on Marco Island as a Category 3 storm, it plunged the city into darkness and toppled a nearby cell tower, making communication with the outside world virtually impossible.

Haueter didn’t have too much time to dwell on his personal situation though because he had a job to do as a Marco Island Police Department (MIPD) sergeant.

“We were so busy we didn’t have too much time to think about it,” he said. “The first five days we probably slept two or three hours a night … four at most. We were working 20-hour days and it was easy to do that because the adrenaline kicks in, so we weren’t even tired. We almost had to force ourselves to come in and try to rest.”

Haueter was one of six officers who stayed at the police department during the storm; the rest of the police force took shelter at the JW Marriott. Haueter and the others stayed because they’re certified to drive Jet Skis, which they thought was going to be their only viable form of transportation after the hurricane.

“We thought we were going to leave here in 10 feet of water,” Haueter said, “so we had six Jet Skis sitting out back ready to go.” 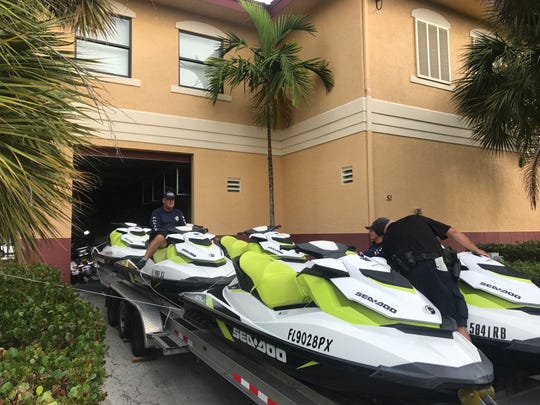 Although Marco Island did not receive the predicted 10 to 15-foot storm surges that would have made Haueter’s vision come true, the southern part of the island still experienced significant flooding.

“I’ve lived here all my life and I’ve been doing this for 30 years now and this was the worst storm I’ve worked on,” MIPD officer Emilio Rodriguez said. “I’ve never seen that amount of water here on Marco, ever. That really surprised me.”

In fact, the water was so high on South Barfield Drive and San Marco Road that the officers technically could have used their Jet Skis, but there were other obstacles that prevented them from doing so, such as the unknown debris that lurked beneath the surface.

“It wasn’t just debris, it was whole trees and roofs under the water,” Clayton Smith, MIPD special operations, said. “We could have done it, but it would have been very hazardous.”

So instead they hitched a ride with members of the Marco Island Fire-Rescue Department and worked together to rescue a resident from the swift flood waters.

“That was out here on Bald Eagle and Heathwood,” which is right near the police station, Haueter said. “The current on Bald Eagle was so strong that when they got him out of the car, he had trouble walking to the fire truck. I had to reach out and grab his hand to keep him from falling over.” 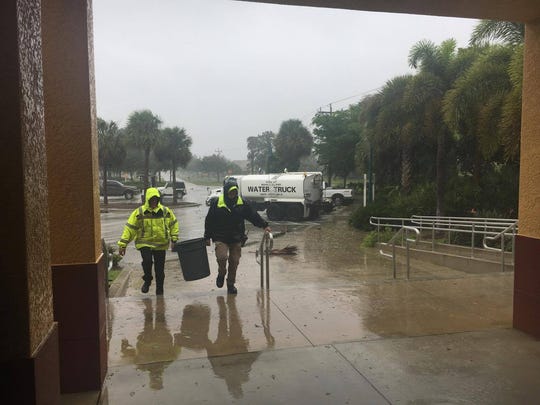 Two Marco Island Police Department officers haul water from a tank to the police station where they were staying during Hurricane Irma. Hurricane Irma made landfall on Marco Island on Sunday, Sept. 10, 2017. (Photo: Mark Haueter/Special to the Eagle)

Other rescue operations included freeing three residents who were trapped in a stairwell and responding to a report of a collapsed roof at an occupied residence. Luckily though, there were no fatalities or even serious injuries, which was due in large part to the fact that many islanders evacuated.

“We had pretty good cooperation with everybody evacuating,” Smith said.

The evacuees became a problem later down the line, however.

“We call them Looky Loos because they want to come out immediately, but the only thing they’re doing is getting in our way,” Rodriguez said.

That's why the officers are asking residents to wait before returning home the next time a hurricane hits.

“The people who evacuate, God bless them, but don’t come back right away,” Haueter said. “Don’t come back the first day. There was no power, no running water (and) no grocery stores were open. We had people who came back who were then issue.”

Now with the city on the road to recovery, the officers are moving onto their next assignment, which is perhaps their most difficult one yet: piecing their own lives back together.

"We stayed here and did what we had to do," MIPD marine officer Bob Marvin said. "Now it's time to clean up our own houses." 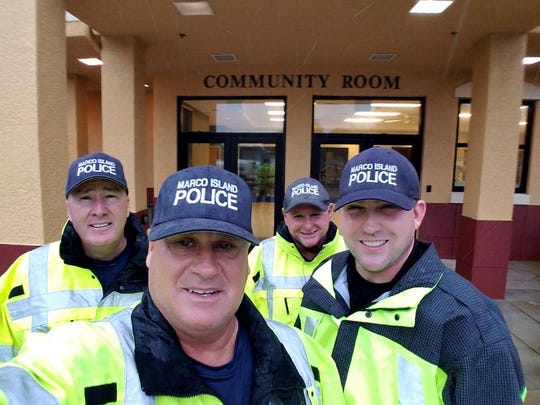