Original photo on the front page of the first edition of the Marco Island Eagle on March 31, 1968.(Photo: Courtesy of MIHS)

It was a historic year for the county, 1968: Americans bore witness to the continuation of the Vietnam War, including the Tet Offensive; the assassination of Dr. Martin Luther King, Jr. and Robert F. Kennedy; the passage of the Civil Rights Act; the election of Richard Nixon; the first manned mission around the moon; and the founding of the Marco Eagle.

The first 8-page edition of the Marco Eagle was produced in a 20-by-15-foot room 50 years ago on March 31, 1968. The front page story was about the Marco Bridge, which would later be renamed the Judge S.S. Jolley Bridge. The $2.1 million bridge cut about 14 miles from the 30-mile trip from Naples to Marco, the Eagle reported.

William Tamplin, a retired employee of the New York Times Company, and Raymond Henle were the founders and original publishers of the Eagle. By establishing the newspaper, they hoped to chronicle Marco Island society and foster the early businesses that embodied the core of the island.

As real estate boomed, the 8-page weekly publication expanded to more than 100 pages. Today the Eagle publishes Tuesdays and Fridays and in season boasts up to 140 pages weekly. The paper also launched its own website: marconews.com. 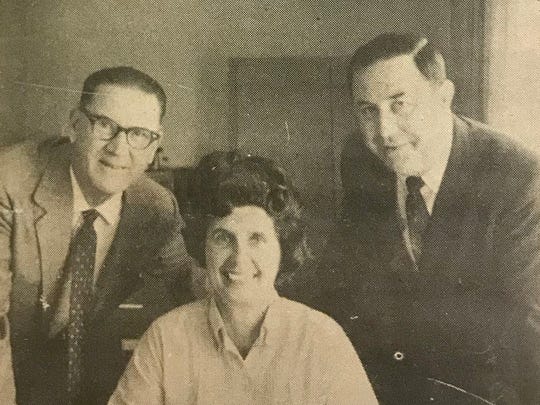 Although many things have changed in the last 50 years, the paper’s mission has not: "We need a clearing house for what's what and who's who, and where you can buy what you want and get the services you need,” the publishers wrote in the first edition of the paper.

"The mighty eagle is our symbol and has given us our name. You, working with us, will find the Eagle soaring high to achieve our objective of a newspaper you will want to reach for first.”

The Eagle still strives to provide the Marco Island community with the news it needs, with help from the community itself, TJ Boone, Marco Eagle manager, said.

“Local newspapers such as the Eagle are essential for a strong community,” Boone said. “On a small island, news and rumors can travel fast, but our readers rely on Eagle reporting to verify information and report the facts.

“We feel honored that our readers have trusted the Eagle to cover island news and events with such longevity," he continued. "Our advertisers have trusted us to help grow their businesses, which in turn helps fund our journalism efforts.” 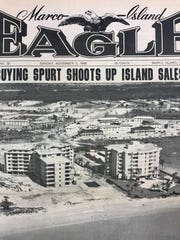 The Eagle remained under the ownership of Scripps until 2015 when the company acquired Journal Communications and spun out the publishing operations of both Scripps and Journal into a new company called Journal Media Group (JMG.)

Just one year later, Gannett Co. Inc., bought JMG for about $280 million, and both the Eagle and the Naples Daily News joined the USA Today Network.

“Having started my career in Gannett, I know firsthand they are committed to developing talent and providing opportunities to excel,” Bill Barker, publisher of the Naples Daily News, said at the time. “We believe in serving and building stronger communities via high-quality journalism and fostering strong business relationships."

Despite the many different hands that have held the Eagle, the paper has never failed to deliver the news to its readers, said Penny Fisher, executive editor of the Naples Daily News, and that's a tradition it plans on continuing.

“I can guarantee that the media industry will continue to change. The Marco Eagle might not be in a printed newspaper form in 50 years, but I know it will still exist,” Fisher said. “There will always be a need for news and information, and the Marco Eagle will be there to deliver it to your fingertips. Our team’s passion and commitment for Marco Island will continue for the next 50 years and beyond."

“While we cannot predict future technologies impacting media in 50 years, one constant is that the Eagle will be dedicated to serving Marco Island,” he said. “ As long as there’s a demand for hyperlocal news and watchdog journalism, the Marco Eagle will be there to serve our local readers.”

There will be a ribbon cutting ceremony and open house to celebrate the Eagle's 50th anniversary and christen its new office. Attendees can enjoy hors d'oeuvres, adult beverages, music and giveaways. Historical Items will be on display courtesy of the Marco Island Historical Museum.