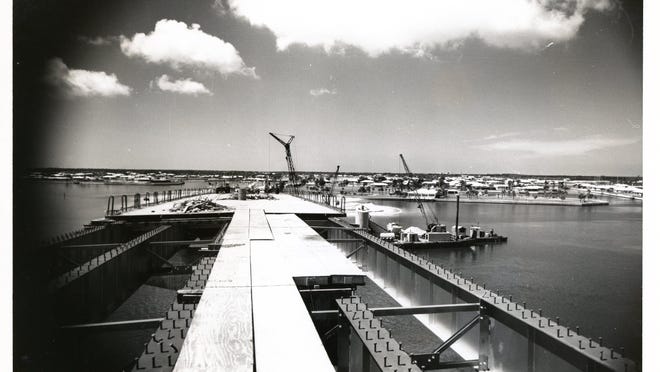 The state awarded FIGG Bridge Engineers a $25.5 million dollar contract for the Jolley Bridge project in September 2009. The project involved building a two-lane southbound span parallel to the existing Jolley Bridge, which was built in 1969.The new span opened in 2011.

FIGG was one of the firms behind the $14.3 million, 175-foot walkway that collapsed at FIU earlier this month.

The Florida Department of Transportation (FDOT) could not be reached for comment regarding the safety of the Jolley Bridge, but according to data available on its website, it has a 94.2 sufficiency rating.

The contractor for the FIU bridge, Munilla Construction Management, has also completed projects in Collier County, including the Golden Gate Overpass on Airport-Pulling Road, which was built in 2006. The overpass is the highest-rated bridge in the county with a sufficiency rating of 100.

Although investigators are still determining the exact cause of the collapse at FIU, they’ve learned that engineers discovered a crack at one end of the concrete span just a few days before the incident.

The university said that two hours before the bridge fell, a meeting was held to discuss the crack. Engineers concluded there were no safety concerns.

State officials were also alerted to the crack two days before the bridge crumpled, according to previous reporting. An engineer for FIGG left a voicemail for officials at FDOT about the cracking.

“We’ve taken a look at it and, uh, obviously some repairs or whatever will have to be done, but from a safety perspective we don’t see that there’s any issue there so we’re not concerned about it from that perspective," the engineer said, according to a transcript provided by state officials.

More:'Cracking is not good': Engineer called to report bridge flaws before Florida collapse

The transportation department said the state official did not hear the message until the day after the bridge collapsed. In a statement, the department said it was entirely the responsibility of the contractors, designers and FIU officials to raise any life-safety issues.

“FIGG and the FIU design build team never alerted FDOT of any life-safety issue regarding the FIU pedestrian bridge prior to collapse,” the statement read.

The National Transportation Safety Board, which is leading the investigation into the accident, was able to determine that workers were tightening two wires that held the bridge in place at the time of the collapse, according to previous reporting.

It's still unclear why cars were allowed to travel under the bridge when the wire-tightening was ongoing and after a crack was discovered.

FIGG defended their team's assessment and ensured that they will continue to work closely with investigators to find out what led to the collapse.

"The evaluation was based on the best available information at that time and indicated there were no safety issues," the statement read.

According to FIGG, the incident at FIU is the first time any of their bridges have failed.

"This is an unprecedented event – no other bridge designed by FIGG Bridge Engineers has ever experienced such a collapse. FIGG-designed bridges have proven to be incredibly durable," the statement read. "For example, we have worked on more than 230 bridges throughout the United States and have designed nearly 35 miles of bridges in the southeastern Atlantic and Gulf of Mexico that have withstood multiple hurricanes."

FIGG has designed other notable bridges throughout the state, including the Sunshine Skyway Bridge in Tampa Bay and the Seven Mile Bridge in the Florida Keys.