Social media posts about a Marco Island employee crashing a city vehicle after pleading no contest to driving under the influence are not true. 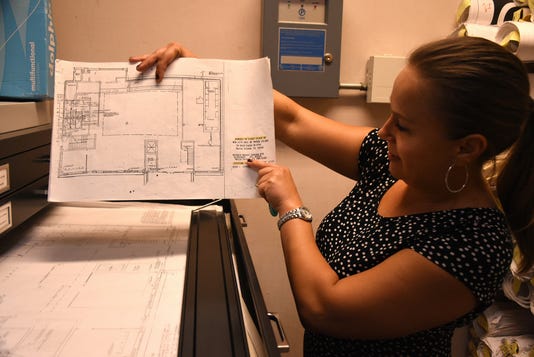 Purchasing and Risk Manager Lina Upham shows the original plans drawn by architect Herb Savage, inside the vault, left over from the building's years as a bank. The City of Marco Island is holding an open house Tuesday afternoon at City Hall, from 3 to 5 p.m.(Photo: Lance Shearer/Correspondent)

Social media posts about Marco Island purchasing and risk manager Lina Upham crashing a city vehicle one month after pleading no contest to driving under the influence are not true.

While Upham was involved in a traffic accident with another employee in the City Hall parking lot earlier this week, a crash report shows that both employees were using their personal vehicles at the time of the incident.

According to the crash report, Marco Island police officer Mark Huffor found Upham at fault for the incident for improperly backing out of a parking spot and into the path of an ongoing vehicle.

Crash report from City Hall by Devan Patel on Scribd

Upham told Huffor that she was unable to see the oncoming car due to another large vehicle with dark, tinted windows being parked next to her.

Upham, who also holds the title of deputy city clerk, became the subject of scrutiny earlier this year after she was arrested on suspicion of DUI after crossing into ongoing traffic and crashing her vehicle into the mangroves near Collier Boulevard and Championship Drive.

In court proceedings seven weeks ago, Upham pleaded no contest to the charge and was sentenced to 12 months of probation, 50 hours of community service, license revocation for 12 months, fines and alcohol restrictions.

As to the use of city vehicles, a log of the pool vehicles does not show use by Upham recently. However, City Clerk Laura Litzan said the city has not put any restrictions on Upham's use of them.

In some of the past incidents where employees have been arrested for driving under the influence, the city has taken away privileges for using vehicles until the Department of Motor Vehicles has completely reinstated the person’s license.

Prior to her arrest, she was also involved in a few other incidents that resulted drew concerns from the City Council.

Police received a 911 call after Upham was witnessed falling down and removing her bathing suit top.

The letter accused the city of sweeping the incident under the rug after Upham was not arrested for the incident.

Police Chief Al Schettino disputed that anything was covered up in an email to acting City Manager Guillermo Polanco and noted that Polanco was informed of the incident months before the letter was received.

Upham was also involved in another accident last year while driving a city vehicle. While police eventually ruled that she was not at fault, she failed to abide by the city’s policies for reporting the incident. The police were never able to reach the driver of the other vehicle.

Because authorities were not notified immediately, there was no way of determining who was at fault at the time the incident was reported, which meant that Upham would have needed to submit to a urinalysis. No tests were ever performed.

Officer Hunter Howell emailed his superiors about the issues with completing the police report and received a response back in which the police placed the blame on Upham for not adhering to city policy.

“Please just complete what you can and submit it,” Sgt. Mark Haueter wrote back to Howell. “Ms. Upham should have contacted us immediately at the scene of the crash allowing us to hear both sides of the story, this certainly isn’t your fault.”

Following Upham’s arrest, the City Council requested assistance from the Collier County Clerk of Court’s Office in performing a sample audit of its contracts.

Councilor Charlette Roman, who proposed contacting the Clerk of Courts office, said at last check, the new audit director was reviewing the 2019 audit plan. Roman said it was her intention to reach out again to the Clerk's office after the holidays.