The seaweed is believed to be sargassum, a seaweed with small air-filled "berries" that floats in island-like masses on the ocean.

City workers have been removing the clumps of seaweed, which are not toxic but smell like rotten eggs as they decay. Naples

Naples residents have recently reported seeing smelly red seaweed on the shores of city beaches, and it may be the "new norm," according to a new scientific report.

"This has been going on for weeks," said resident Mike Lombardo, who's lived in the area for three years. "(The seaweed) is thick and nasty and it stinks."

The seaweed is believed to be sargassum, a seaweed with small air-filled "berries" that floats in island-like masses on the ocean.

"While it hasn't positively been identified as sargassum, that's the general consensus is that is what we're seeing," Stephanie Molloy, the city's natural resources director, told the city's Community Services Advisory Board this week. 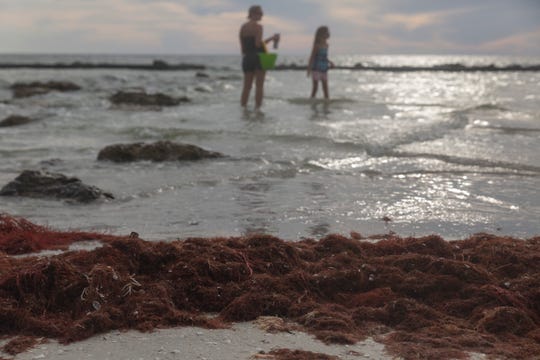 More: 10 things you need to know about sargassum seaweed

And: Sargassum seaweed: The good, the bad and the ugly

Sargassum is a natural phenomenon first reported by Christopher Columbus in the 15th century, but in recent years an increase in nutrient runoff from the Amazon River, upwelling off the western coast of Africa and changing water temperatures due to climate change have created the perfect conditions for the mats to flourish.

In 2011 the mats grew to form a 5,550-mile-long belt that extends from West Africa to the Caribbean Sea and Gulf of Mexico, according to a recent report by the American Association for the Advancement of Science. 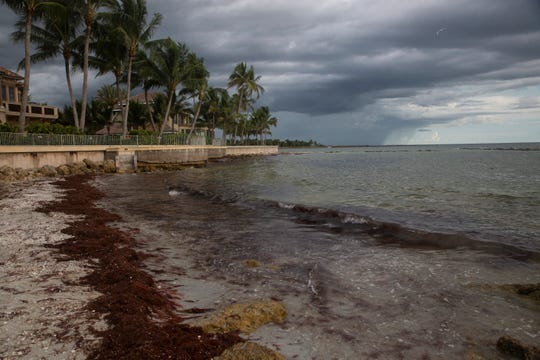 "If you've got ... some pockets of growth (that) survive over the winter and you've got a bigger seed population for the spring, then you could get a much bigger growth the following season," Molloy explained.

Editorial: So far, so good with 2019 water quality, but long-term issues require attention

In case you missed it: Volunteers wade through murky waters to haul up trash at Naples Pier

Although the seaweed's red coloring may cause people to associate it with the deadly red tide algal blooms, the two are "totally different things," Molloy said. In fact, sargassum is actually brown and only turns red when it washes ashore and starts drying out and decaying. 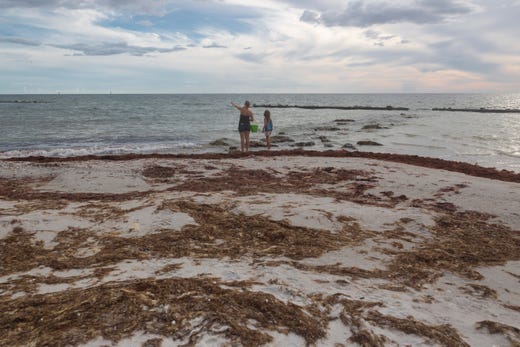 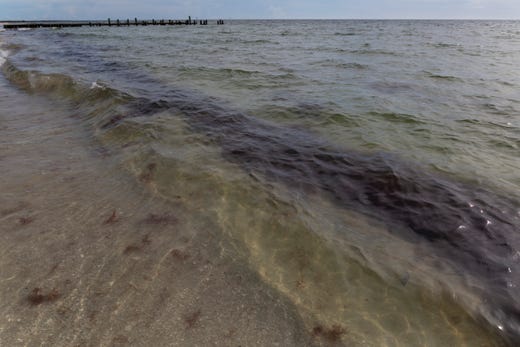 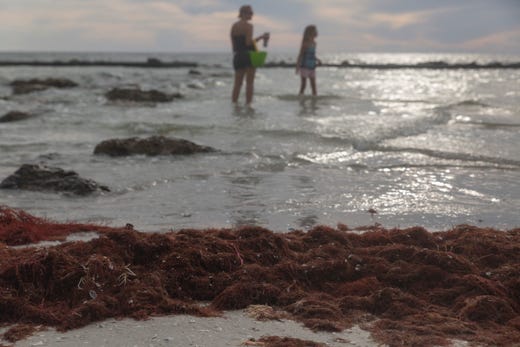 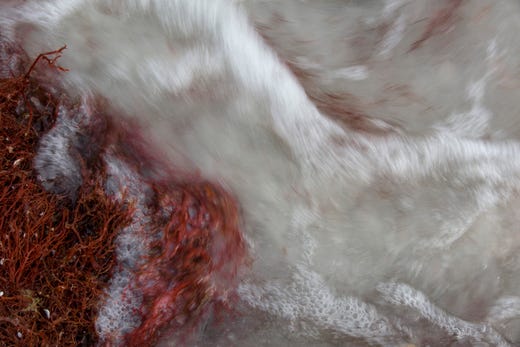 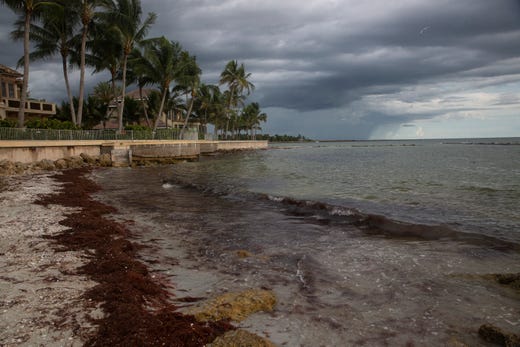 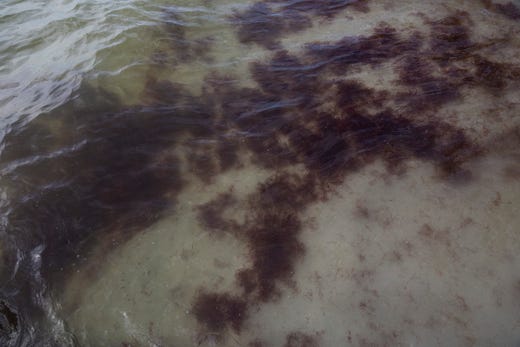 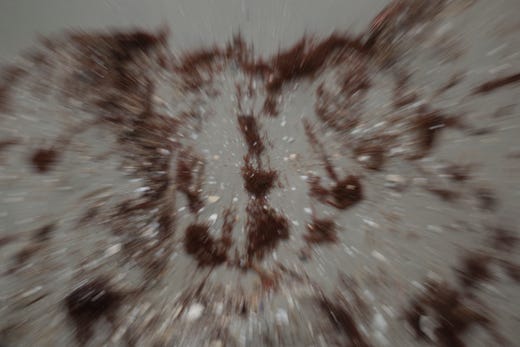 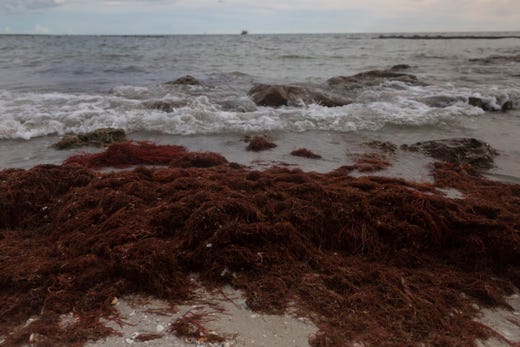 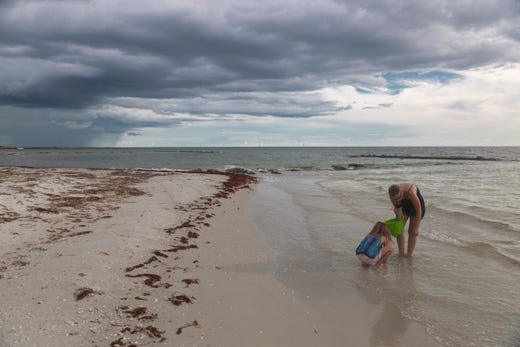 "What we call this is a red drift algae. It's a macro algae, meaning it's the big algae that you can see versus the red tide, which is a microscopic organism ... and not a seaweed at all," Molloy said.

Another big difference between sargassum and red tide? The seaweed isn't toxic.

"The sargassum seaweed itself is not toxic and in fact it’s used as a food source, it can be eaten," Molloy said. "However, when it comes up on the beaches and starts decaying and dying, it can smell bad. Obviously there's an odor (and) the decay process emits hydrogen sulfide, which is that rotten egg smell."

Exposure to hydrogen sulfide could negatively effect individuals with asthma and other respiratory conditions, according to the Florida Department of Health; however, that's unlikely to be the case in an open-air environment such as the beach, Molloy said.

"Sensitive people may be impacted if they're exposed to hydrogen sulfide for an extended period, but that's unlikely in this scenario unless (the seaweed) is several feet deep on the beach for a long period of time," she said. "But we've got sea breezes carrying it away, so that's probably a low potential in Naples."

And: Coast is clear, for now, as wildlife begins comeback from devastating red tide bloom

Naples isn't the only Florida beach community that's been suffering from a recent influx of sargassum; cities on the east coast of the state, including Miami Beach and Boca Raton, have also been battling the smelly, mucky seaweed, and sargassum began appearing on Fort Myers Beach and Bonita Beach earlier this spring.

And it's not just the U.S. that's facing this problem; reports estimate that Mexico has spent approximately $17 million to remove more than a half-million tons of sargassum from its beaches, and Jamaica has spent close to $120 million.

Dana Souza, director of community services, said the city hasn't calculated the total cost of its own cleanup effort, but so far this year it's spent $8,000 just on dumpster and disposal fees. 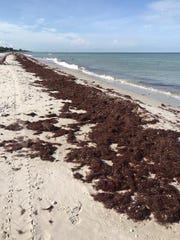 Sargassum seaweed sits on the shore near Lowdermilk Park in Naples on Saturday, Aug. 17, 2019. The seaweed is nontoxic, but emits hydrogen sulfide gas, which smells like rotten eggs. (Photo: Mike Lombardo / Special to the Daily News)

But the biggest cost is time.

Although city staff monitors beach conditions daily, they're only scheduled to rake the beaches the first week of each month, Souza explained, so when they have to undertake additional, unplanned cleanups — like when there are fish kills or clumps of seaweed — it pulls them away from other projects.

"If our personnel have to be continually deployed to the beach to clean up seaweed, that means that there are other things that are also part of their primary responsibilities ... that they won't be able to do," he said.

You might be interested in: Thousands of dead fish litter Naples' Moorings Bay; cause of death unknown

Souza said he doesn't think the city has a "seaweed crisis," and Molloy said she expects the conditions to improve around October or November, before the majority of seasonal residents return.

However, she also warned that sargassum may become a regular sight on Naples beaches.

"These scientists that wrote this paper are suggesting that we're at the point now where this great Atlantic sargassum belt and the beaching events (are) the new norm," Molloy said. "Now we've got this shift from what is an essential habitat to what might be some sort of severe and potentially perpetual nuisance that we'll have to deal with."