On the Hook: A freezing fishing morning suddenly turns hot

If you’ve been here the last couple of weeks, you know what a COLD morning can do to the mystique of this island “paradise." It throws plans and outdoor activities into a dither.

On the Hook: A freezing fishing morning suddenly turns hot

If you’ve been here the last couple of weeks, you know what a COLD morning can do to the mystique of this island “paradise." It throws plans and outdoor activities into a dither.

Even residents who have spent years “tolerating” 70 degree winter days go into hard stop when the morning temperatures dip to 40-something and the winds rip through like an arctic rapier. You can spot them easily on those mornings ... they're the ones wrapped in mismatched swaddling clothes taking their morning walk. 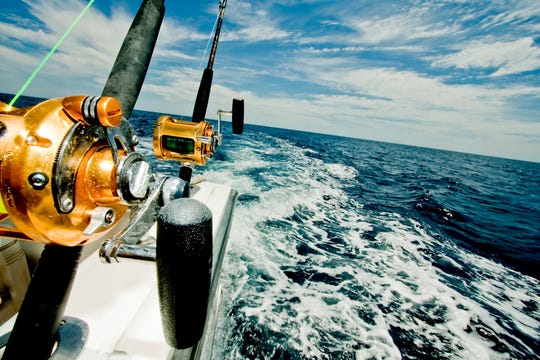 Fishing out in the deep blue on a cold Southwest Florida day can be trying for the heartiest of souls. (Photo: grandriver, Getty Images)

That cold hurts ... big time. But as the saying goes, you ain’t seen “nuttin” yet until you experience that cold out on the briny.

That northwesterly wind on those mornings must start somewhere around the Big Easy (New Orleans) and pick up speed along the way here that takes an already frosty morning into the realm of unpronounceable.

More: On The Hook: A fishing trip for the ages

There was a morning like that early last year. I had a charter booked by a family for a half-day (morning) fishing trip. As is usual in such dire weather circumstances, I called the customers early suggesting that a trip to the movies would be a better choice than four hours of deep freeze in muddy water.

This particular morning that suggestion of cancellation was rejected by these folks with an emphatic “we’re here and we’re fishin'." That decision, in my opinion, bordered on “locoism” but it’s always the customers call once you bring the conditions front and center.

So there we were on the appointed morning, me in the warmest clothing handy and, them, a father, two wild sons and a quiet younger daughter traipsing down the dock looking like a family of Michelin men in overstuffed clothing.

We started the trip in an Arctic cold morning with assisting winds of 20 knots out of the northwest. All the crew huddled in the lightly sheltered cabin in shuttered silence as we made our way down the near vacant Marco River. One of the boys and the young girl were grousing about the conditions which evoked a reprimand of “Dad gum it, we’re here and we’re gonna fish” from their father and on we went.

Our first fishing spot was one that historically had produced good action this time of year ... and because it was in a lee of the wind, that particular morning the water was nice and clear. We baited up the four lines and had at it.

Surprisingly, we had almost instant strikes on three of the lines albeit with a brace of small sheepshead and a runt mangrove snapper. I was pleased. The father wasn’t  ... "those fish were runts. We want something to take home for dinner”. Talk about unreasonable expectations. So we moved again to a major fishing spot that was in the very throat of the wild northwesterly winds.

There were other boats there but coming and going ... the severe conditions were extreme there. We anchored up and got baits in the water and I noticed that his young daughter was in tears. I even offered to cut the trip price and head back ... this cold and wind was insufferable, especially on the kids. Dad would have none of that.

“Take us to a spot out of the wind even if the water is muddy. All of us are staying out here ... we’re on an expensive holiday”

We pulled anchor and headed south to the environs of the Marco River and its tributaries. With the wind dead out of the northwest, I knew the water would rival Starbuck’s Cafe Latte in color and transparency. My expectations were dead low ... but what other option did we have?

The spot selected was just off the Marco River adjacent to Collier Bay. As expected the spot was totally sheltered from the biting wind, which was relief for all the crew, but the water clarity was worse than expected. Baits tossed into the current disappeared instantly.

We had a little over an hour left on our half day morning trip ... couldn’t  wait for it to be over.

But I forgot that fishing defies reason and that was going to be played out in spades in the next half hour.

‘Within five minutes, with all four baits in the muddy water, one of the boys had a huge strike and after a struggle assisted by Dad, he landed a nice size keeper sheepshead. I couldn’t believe it ... the water was totally occluded ... passed it off as a fishing aberration.

That is until the four of them rebated and recast. Now we had two strikes from the girl and one of her brothers. Two more keeper-size sheepshead tumbled aboard.

Then Dad followed up with another keeper. He gave me one those sneering glances as he dropped the last of that night’s dinner into the cooler.

The gang was smiling ear to ear as we headed for home. The boys even thanked their sister for being cold, for without the move to warm her up the day would have been a bust.

That sort of said, in an oblique way, that captains don’t know everything.

More: On The Hook: Selecting the target species