Letters to the Editor, Nov. 7

Letter-writer Bill Korson is right that Florida Citizens' Alliance (FLCA) wants to keep politics out of Collier schools. But what does that mean?

Letters to the Editor, Nov. 7 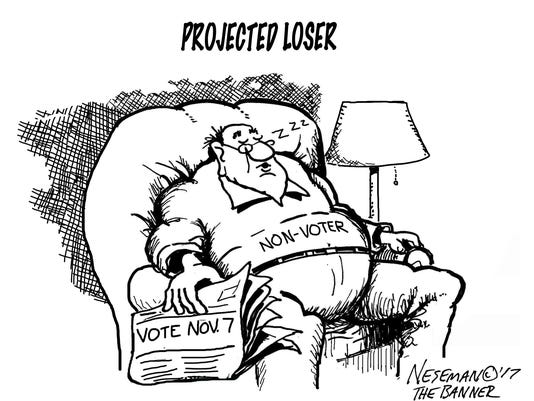 Editorial cartoon for The Banner on Saturday, Nov. 4.(Photo: Submitted)

Letter-writer Bill Korson is right that Florida Citizens' Alliance (FLCA) wants to keep politics out of Collier schools. But what does that mean?

Today, social studies textbooks and novels used in Collier County and Florida are riddled with political and religious indoctrination, revised history, age-inappropriate and sexually-explicit material, and math methodologies that are dumbing our children down.
Fifty percent of our 2.8 million students in Florida cannot read or do math at grade level, yet our proprietary grading system tells parents, taxpayers and businesses that many of our schools are A and B schools because it grades on a curve.

In Florida, we use Next Generation Sunshine State Standards (aka Common Core) and aligned curriculum and high-stakes Florida Standards Assessments testing. Yet just this week, Technocracy News and Trends reporter Lauren Camera, reported that Bill Gates, who has invested $6 billion in the Common Core standards curriculum and high-stakes testing, is backing away from Common Core: “After admitting to the mess that was made with Common Core State Standards, Gates is moving on with a brand new experiment to reform education in America. Gates, a consummate technocrat, wants to see faster and lasting change in student achievement.”

Establishment progressives would have you believe that FLCA is a political right-wing alliance, but what we are is a nonpartisan coalition that promotes individual liberty and teaching our founding values rather than a system that teaches socialism, government dependency and morality that breaks down traditional Judeo-Christian family values upon which our great country was founded.

It is time to admit the current system is failing our children. It is time for competition in public schools, universal parent choice and teaching knowledge-based skills that dramatically improve student outcomes.

It is a shame that the editorial board of the Naples Daily News only prints its version of a happening rather than giving a complete picture showing the truth.

In the Oct. 27 editorial, you felt it necessary to give a “kick” to Marco Island City Councilman Joe Batte and myself for not putting forth our preferences for the list of candidates brought forward by the consultant. You stated, “Brown and Batte then didn’t offer their preferences among the semifinalists, leaving it to the other five council members to choose.”

Had you actually listened, you would have heard from the council chair that we were not to speak anything negative or question anything that could be conceived as negative. That being said, the consultant agreed and directed us that if we felt that none of the candidates was someone we were comfortable with, we should not offer any preferences and just remain silent. We followed the guidelines.

Again, your newspaper does not think that being fair and balanced in its coverage is important.

During Hurricane Irma, the Civil Air Patrol hangar at Marco Island Executive Airport was destroyed. The office and meeting sections of the facility still seem secure and usable. Our next step will be to secure bids for the hangar rebuild once the debris has been cleared.

The extent of this damage far exceeds our available funds. Fourteen years ago, it was through the generosity of our neighbors like yourselves that the building was successfully funded and erected. A number of our members already have stepped up with donations of their own, but without additional financial assistance, hangar reconstruction will be impossible.

Since 1981, the Marco Island Civil Air Patrol Squadron has been a valued resource to Collier County, providing coastal patrol surveillance, search and rescue and disaster relief expertise and participating in Air Force missions in support of Homeland Security. With your help, we will be able to continue our service to Collier County and Southwest Florida for many years to come.

As we did 14 years ago, we are looking for community support in this endeavor. We realize all of us are dealing with our own recovery expenses, but I hope you see the importance and the need to get the squadron back up to normal operations.

Thank you for your consideration.