Letters to the Editor, Sept. 28

Letters to the Editor, Sept. 28 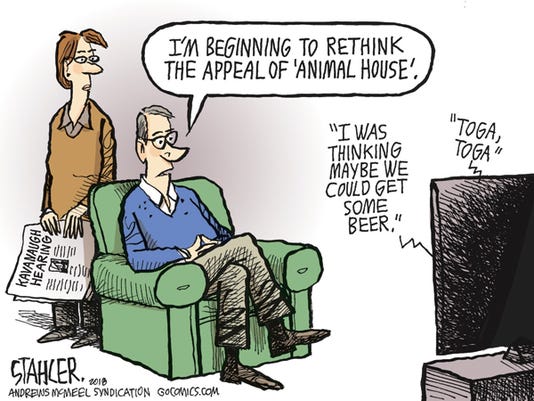 The candidates have been asked to complete two questionnaires:

The issue-based questionnaire will be used to create a voter guide to help voters cast informed votes. The constitutional survey serves the purpose of understanding candidates’ views regarding the oath to preserve and protect.

Results of the issue-based survey will be released Oct. 5.

I find it deeply disturbing that the city of Marco Island shows favoritism when enforcing regulations related to the placement of political signs.

I’ve noticed that city officials allow Jerry Swiacki, Jim Richards and Sam Young to place their political signs in the city’s right of way, in the swales and in the grassy areas between sidewalks and roadways. This is against city ordinances and should be enforced equally among all candidates for election or re-election.

The other disturbing aspect of this is whether you want to vote for someone who flaunts their willingness and eagerness to thumb their noses at ordinances and regulations. Do we want to elect someone who has no regard for our laws? If they willingly and knowingly break the law in their campaigns, what ordinances will they refuse to follow and enforce if they should be lucky enough to gain political office? Do you want someone like this handling your checkbook?

At the very least this goes toward the character of these individuals and I find them lacking.

I say no. We do not want anyone who refuses to obey the laws on our City Council. Do not vote for Swiacki, Richards and Young.

I urge everyone on Marco Island to read the Naples Daily News’ Sept. 16 editorial in support of a fertilizer rules summit. I have been asking for this for two years in presentations to community groups.

My thoughts can be found on my website, www.votesamyoung.com. Conservancy of Southwest Florida President Rob Moher says, “Our economy, human health and our quality of life in Southwest Florida depend on the health of our waterways.”

This summer, I solicited support from three volunteer Marco Island committees to hold a joint workshop to review, revise and update our fertilizer ordinance: and then enforce it.

The Marco City Council should also review our stormwater management practices and current conveyance of untreated stormwater directly into our waterways through 1,800 outlets punched through sea walls and into our canal waters.

Healthy waterways have been the cornerstone of my campaign as a candidate for Marco Island City Council.

There has been a lot written lately about the candidates for Marco Island’s City Council. It’s no secret Marco has had its share of issues lately – from finding a city manager, police scandals, building permit backlogs and now impaired waterways from too much nitrogen.

City Council needs some fresh faces with new ideas and the strength of character to get things done, not just talk endlessly about them.

Sam Young is one of those candidates and one I’m proud to say I’ve known for over 50 years. From showing leadership as the captain of our high school football team, to raising two terrific daughters who grew up with my sons, a successful 40-year marriage to his great wife Sheree, to a long and successful career as a sales and marketing executive and now active as a fisherman and licensed charter captain, he has the skills and determination we need on our council.

When I first came to Marco I reconnected with Sam about the deteriorating condition of the waterway behind my home. Through his experience on the Waterways Advisory Committee, he brought me up to speed on the negative effects of fertilizer, the need to revitalize our swales, improve our storm water management, and the need for monthly water testing to track the condition of our canals. Sam and his family have lived on Marco for nearly 15 years and has other family members here as well. He is committed to Marco Island and, as he says, “Preserve Our Island Paradise.” He’s got my vote and I hope he has yours too!