Letters to the Editor, Oct. 5

If there is any truth to the saying, “you can judge a person by the company he keeps."

Letters to the Editor, Oct. 5 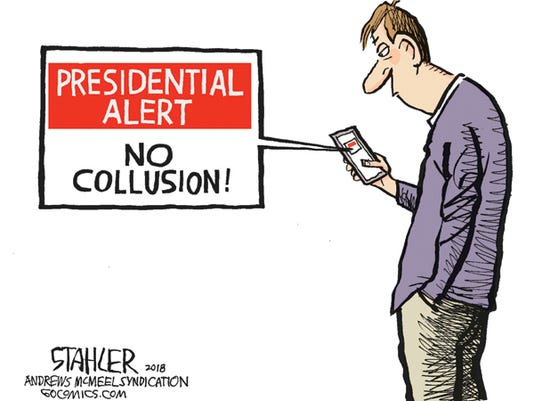 If there is any truth to the saying, “you can judge a person by the company he keeps”, President Donald Trump can be judged from the following of his associates.

Rick Gates, Trump’s former deputy campaign manager, pleaded guilty on one count of conspiracy against the United States and one count of making false statements to FBI agents.

Tom Price, Trump’s Health and Human Services secretary, quit in a variety of scandals including charter flights, a private soundproof booth, employment of high-ranking Environmental Protection Agency investigators for his security details and others.

It is also worth noting that these criminals and corruption activities have been discovered within the first 18 months of Trump’s administration.

If the tax is passed …

The Marco Island city website states, “In order to fund projects on a cash basis the city’s goal is to accumulate $5 million annually to meet its general government long and short term capital needs. The capital improvement plan sets money aside and takes the risk out of the future.”

If the one-cent temporary sales tax (for seven years) is passed on Nov. 6, the city of Naples’ and the city of Marco Island’s share would each be $30,000,000 or $4,286,000 per year. This would be 86 percent of the Marco Island capital fund needs for seven years. It is projected that tourists will fund 30 percent of the total one-cent increased sales tax county wide.
The Naples City Council and the Marco Island City Council could choose to do planned capital projects sooner or could choose to reduce your property taxes $4,286,000 per year for seven years.

Sugarcane farmers not to blame

In a recent letter, Herbert Krutisch claimed sugarcane farms block the historic flow of lake water south to the Everglades. That is false. There is a man-made dike that surrounds Lake Okeechobee for flood protection for the Glades and the lower East Coast of Florida; however, there is an entire system of canals that still convey water south to the Everglades. The water from our farming area went south in the natural system and it still flows south today. We’ve been farming this area for nearly 90 years and our farming practices have only improved over time. If farming were the issue, you would have seen these coastal water issues continuously in the 40s, 50s, 60s, and 70s, etc.

The truth is that South Florida has been irrevocably altered to accommodate 7 to 8 million people, a thriving tourism, construction and agricultural economy as well as Everglades National Park. Due to Everglades National Park, the federal government now determines exactly what the water levels in the Everglades will be when it is wet and where that water will be discharged to keep the Everglades or any federally endangered species from being impacted.
The South Florida Water Management District has been sending water south whenever the federal government allows under emergency deviations. But the federal government remains in charge of whether or not water flows south to the Everglades. Not sugarcane farmers.
We are willing to work with all stakeholders to find science-based solutions to our shared water problems, but we have stop the blame game and look at the real issues in order to find real answers.

I’m writing this letter in support of Collier County commissioners who are attempting to negotiate the purchase of the Golden Gate Country Club for preservation of its green space and potential use as a municipal golf course. This foresight by the commissioners provides a unique opportunity to provide an affordable golfing experience to the residents, as well as preserve green space vital for recreation, healthy living, community interaction and natural wildlife habitats.

As the county continues to grow, the amount of green space becomes much more limited. Therefore, it is even more critical to value our green spaces and to find a way to balance these spaces with ongoing development.

We have before us an opportunity to preserve the green space and cultivate a valuable community asset and family resource. Please don’t let this opportunity pass; it is not likely to present itself again.