Letters to the Editor, Oct. 19

Alex Parker was the moderator and appears to be a long-time Jerry Swiacki supporter.

Letters to the Editor, Oct. 19 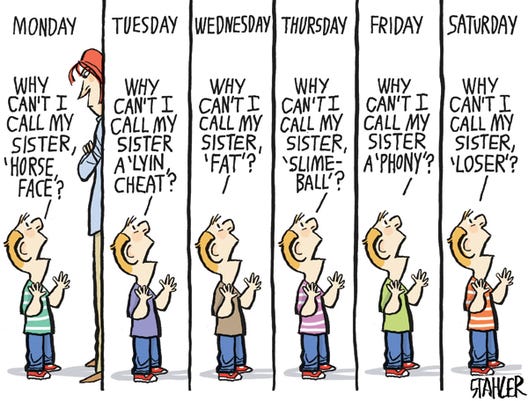 The Marco Island Council Candidate forum hosted by the Chamber of Commerce, Board of Realtors, and the Marco Island Civic Association on Oct. 10 should be an embarrassment to the sponsoring groups.

Parker has Jerry Swiacki signs up on his properties across Marco Island. He appeared to inappropriately and purposely exclude Victor Rios and Sam Young from answering questions they had unique expertise on, preventing the citizens of Marco Island from hearing their responses on two important questions facing our Island. If Dianna Dohm was responsible for choosing questions from the audience to ask the candidates they were, not surprisingly, softball questions for their candidates and mean-spirited and negative attacks veiled as questions against those they want to see defeated.

It was apparent to many in the audience at [the] forum that the Marco Island Chamber of Commerce has already chosen its candidates and slanted the format and questions to favor certain candidates over others.

The citizens of Marco Island deserve better from the sponsoring organizations.

How is one to filter out all the campaign rhetoric to make an informed decision? With information now available online through local websites and tradition press, one might be overwhelmed.

Given the vast amount of information, I found one website to offer discerning commentary as well as entertainment. Interestingly, the best information made available through commentary is via anonymous emails and a website hosted by anonymous authors.

An independent watchdog is sorely needed.

As a resident, I want an efficient and professionally staffed city with quality controls that apply to management and employees. I want a council of the same caliber so I strongly recommend candidates who are running independently.

OMG Jerry Swiacki, campaign finance violations – how could you?

What are we talking about here? Millions? Thousands? Many hundreds? Wait a second here as I read a bit more … Oh, the printer left off that little disclaimer line in your ad? Your volunteer finance person used the wrong three letter code? Not once, but a few times? Really! And you may have (conjecture here) gone seven bucks over a campaign contribution limit?  Horrors. Truly horrors appropriate for the Halloween season.

The horrors, however, are not these truly minute infractions of campaign legalese and fine print. Of course, if there were errors, they should be corrected, regardless of how small in scale. The horror is that someone would apparently spend hours and hours of their time to track down these tiniest of infractions so that they could malign a truly good guy who has done nothing but work to improve community life on our beautiful Marco Island.

Think about the pettiness and the level of hatred that would drive someone to invest apparently hours of his or her life to get the goods on Jerry. And this is all they could come up with?

Citizens of Marco should be tuned into anyone who comes out in support of these egregious (kidding) complaints that have been filed against Jerry. If we want to truly see an end to the pettiness, they and whomever they support are probably not the types who will bring us to a higher level of civic discourse.  In time we will know who invested time and effort to uncover the alleged wrong doings. Once the Florida Elections Commission makes a determination, the identity can be disclosed by a Public Records Request. Let the guessing games begin.