Letters to the Editor, Jan. 15

I am writing this letter in regards to the bicycle traffic at the intersection of Collier Boulevard and Tigertail Court.

Letters to the Editor, Jan. 15

I am writing this letter in regards to the bicycle traffic at the intersection of Collier Boulevard and Tigertail Court.

There is a sidewalk stop sign for cyclists going south on the Collier Boulevard sidewalk. Or at least I am assuming it is a bicycle stop sign but can’t be sure since there is no further signage to indicate this and I have never seen anyone on a bicycle stop for the sign. 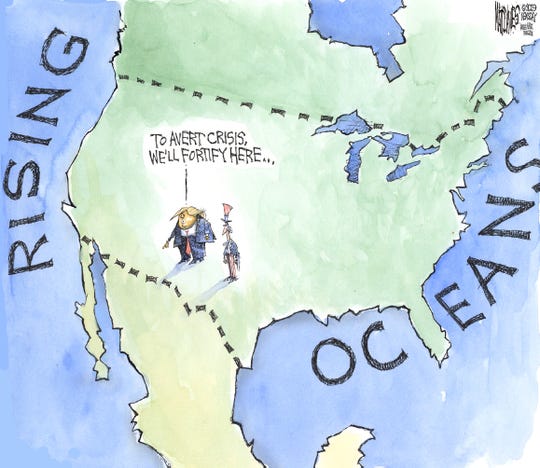 As a motorist I am just under the assumption the stop sign is a mere decoration.

Persons on bicycles are traveling very quickly down the hill proceeding south approaching the Tigertail intersection. The city needs to post a sign on the bridge letting cyclists know about the stop sign ahead that is intended for the bicycles.  If that indeed is what the stop sign is for.

ALF should be rejected

I have been a resident of Marco Island since 2003. I have reviewed a number of public documents pertaining to the two assisted living facilities (ALFs) that are under review by the Marco Island Planning Board and the Marco Island City Council. Those documents are referenced in the text below. I also attended the Dec. 7 extended Planning Board Meeting to hear, first-hand, the dialogue, expectations and concerns of the San Marco Community.

The following points in the referenced documents and expressed at the Dec. 7 meeting, have helped me to form my position regarding the proposed Watermark ALF.

Councilman Sam Young stated, “ … I don’t believe the citizens support having a mega-sized (top one percent in size) adult living facility (ALF) at one of the busiest intersections, Bald Eagle and San Marco, with up to 200 occupants taking up most [of] the last large parcel of green space left.”

In summary, the growing concern as to the credibility of the Planning Board, together with the striking opposition that continues to be expressed by the Marco Island community, should persuade the Marco Island City Council to reject the Watermark proposal at the Jan. 22 meeting.