Letters to the Editor, Feb. 19

Let that concept begin now.  No need to wait for the ordinance to be created/to take effect.

Letters to the Editor, Feb. 19 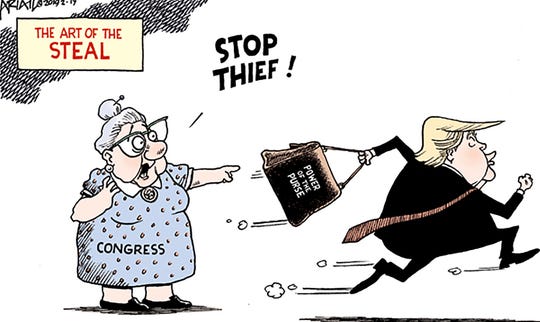 Letter to the editor (and City Council).

Stop ... paying for updates to a master plan.

Stop ... looking for funding to make it happen.

We ask for minimal upgrades, restrooms, and outdoor performance staging (a portable one perhaps?)

All your campaigns ran on promises of minimal upgrades; $4.46 million is not minimal! You are planning  to create an ordinance requiring super majority votes on capital expenditures.

Let that concept begin now.  No need to wait for the ordinance to be created/to take effect.

Thank you for your attention

During his State of the Union address, President Trump had the facts behind everything he had to say. By contrast, in her rebuttal speech that followed, Stacey Abrams had to resort to distortions and falsehoods to make her points.

For instance, “women and men who could thrive if only they had the support and freedom to do so.” The truth is what we have today is record-breaking prosperity at all levels of our society.

Another example, “The Republican tax bill rigged the system against working people.” She’s referring, of course, to the tax cut that boosted the bottom line for businesses, enabling them to increase wages and/or expand their businesses.

When she lost her bid for governor last year, she then spoke of “voter suppression” but gave no details.

The first time I ever heard of her was on TV as she proclaimed, “I’m sick and tired of hearing about the free market.”

I submit that Ms. Abrams is emblematic of a significant portion of our population today, mostly women, who our founding fathers had the wisdom to protect us against when they set up the elaborate system of checks and balances that drives our democratic republic today. However in the final analysis, it comes down to us, the voters.

I chose Ms. Abrams to highlight because she is articulate and presents herself well, rendering her extremely dangerous because of her ideology.

I would vote in a heartbeat for all congresswomen with the mindset of a Candace Owens or a Harris Faulkner, two prominent Afro-American women.

In defense of a columnist

This letter is directed to Patricia Gill, who has complained that Ann McFeatters is biased in every article she writes. (“Just about every article she writes manages to bash the president politically or personally. A journalist’s job should be to report both sides of the issues, without constantly unveiling their personal bias.”) Please look at the top of the page when you read her articles. It says “Editorial/Opinion.”

These two pages are pretty standard in newspapers and have been for many years. They are called the Op/Ed pages. That is because people who write on them are expressing their opinions! They are not performing journalism, which is a reporting of the facts.

And that is why letters to the editors are on these pages as well. Because they are your opinion.

So, it is perfectly fine to disagree with her opinion. But do not expect her to be a journalist when she is writing on the op/ed page.

And by the way, I think it would be excellent if newspapers made more of an effort to point this out.

Yeah, about the economy ...

Cal Thomas’ column headlined “President’s call for unity falls on deaf ears,” regarding the president’s State of the Union speech: True, anybody who stayed up to listen to it heard what they wanted to hear.

What I heard was a theatrical presentation, well done, but no substance about the state of our union.

The current state of our union is this: We have overspent our yearly federal budget and we are on record to increase our long-term national debt of almost 22 trillion by $1 trillion. Is that economic achievement?

By the way, talk about socialism, perhaps a tax cut for corporations, high incomes and the wealthy could be considered capitalistic socialism? Does it help them make more revenue instead of the government, in the case of corporations, more profit or maybe called corporate welfare? It certainly did not help cut down our yearly federal budget nor our national debt, did it?

Just one more beauty of taking of bluster and undue credit by the president. “We are now the largest producer of gas and oil in the world.” Yes, we have been, I believe, for seven years, Mr. President.