Letters to the Editor, May 3

The flagrant hypocrisy displayed in Joe Batte’s op-ed in the April 26 edition of the Marco Eagle was laughable to me.

Letters to the Editor, May 3 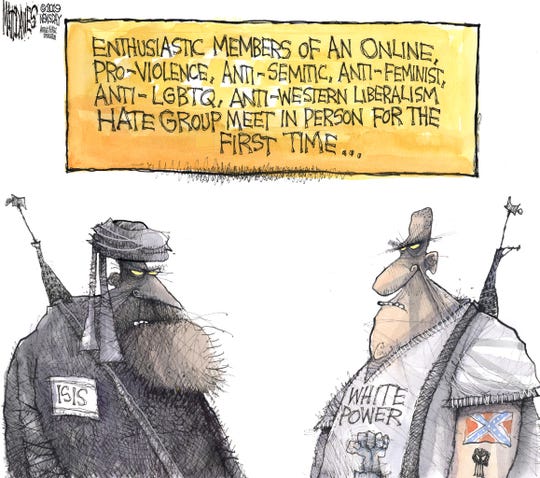 How much more must this island take?

The flagrant hypocrisy displayed in Joe Batte’s op-ed in the April 26 edition of the Marco Eagle was laughable to me. The out of touch mentality of the “Keep the Chief” movement is highlighted when you have Joe Batte as its ring leader and chief advocate.

Of course he is defending his pal, the police chief, who allowed and potentially encouraged his negligent behavior. Schettino does Batte's bidding, no questions asked. As councilor, Batte demanded Schettino issue a citation to his neighbor even though the officer who investigated the complaint found no wrongdoing. Schettino ignored the officer and obeyed Batte's order. Is this someone that has any credibility? Special treatment, targeting of citizens and selective enforcement is what we got under him and Schettino.

In Batte’s editorial he gushed that Schettino “captured the hearts of so many of us.” That’s easy to say when he is on the receiving end of special treatment that he clearly wants to continue. For victims and critics, it’s not so easy for them to make themselves known publicly. When they do, Batte and his mob threaten, scream at them and slandered them as they tend to do at City Council meetings.

Batte’s editorial and speech to council brazenly urged them to violate the city charter and direct the city manager to overturn Schettino’s resignation, something the charter clearly forbids.

The icing on the cake is Batte lecturing what a “legacy” should like for “dedicated city councilors” when his own legacy, as well as Al Schettino’s, is marred with misconduct, special treatment and corruption.

How much more must this island take of this fraternity-like culture at the MIPD?

Letter writer Michael Troop attempted to denigrate our Electoral College’s election of President Trump with the analogy of an electorate voting in favor of using leaches to treat a headache instead of an analgesic. Such analogy assumes ignorant voters, so let’s again follow his logic and numbers but this time presupposing a fairly informed, knowledgeable constituency:

As a consequence, we as a country, rejected Hillary Clinton and elected her opponent, Donald Trump. Letter writer Troop feels our majority didn’t prefer this but that’s what the Electoral College did.

The fire commissioners stated to the public for those previous fire agency consolidations that they were going to both provide better service and save taxpayer money.

Although some are dangerous, fortunately, fewer than 2 percent of responses are fires.

While 86 percent are medical responses, service calls, and good intention calls. The remainder is false alarms and other non-fire calls.

Thus, fire agencies are mostly in the medical response business.

All Fire Agencies could implement further cooperation in operating protocols, training, and other support functions that could save money.

Another option is Immokalee, Greater Naples, and North Collier Fire Commissioners could continue to further provide better service and save taxpayer money by consolidating into two, or even one fire agency for the entire unincorporated county, as supported by 63.7 percent of those voting and passed by a majority in 51 of 53 county precincts, to that March 2016 ballot question.

"You know?” is a phrase that you hear increasingly, from television announcers, and public speakers, after an expository statement. I don’t know if it is a subjunctive question, seeking reaffirmation of that which was uttered or simply a reflexive utterance that supplants a comma or a colon in speech. Sometimes, an educated, and the seemingly sophisticated speaker will employ the phrase 20 times in an interview. What’s up with that? It makes the speaker sound like a semi-literate babbler.
Anyone, versed in the art of public speaking, knows that there are a lot of nerves involved when facing a large audience, each straining to hear what you have to say. The momentary thought transition, of reflexive pauses, when shifting mental gears, often manifests itself in the phrase “You know?” All well- trained public speakers are trained to avoid the utterance. Like “Er” or “Um,’ they are a phonic irritant to the listener. Most speakers are trained to pause, often saying nothing for a few seconds, until the mental transition is completed, and another verbal train of thought is entered into.
So, I appeal to all commentators and public speakers. Lose the phrase “you know” from your presentation. We in fact “don’t know” and are distracted from your message by this stylistic faux.