Letters to the Editor, Nov. 29

Where's the congressional 'take charge' attitude on gun control? Seen anything? Heard anything?

Letters to the Editor, Nov. 29 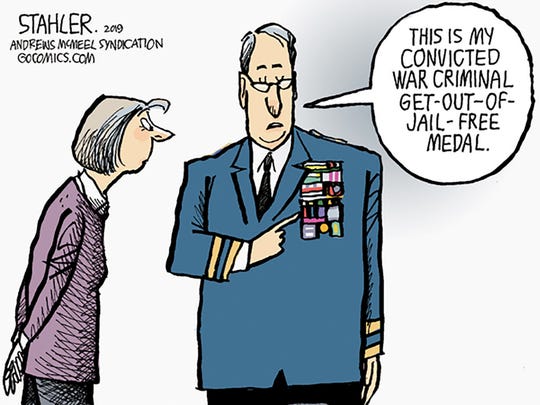 Still no action for gun control

Where's the congressional 'take charge' attitude on gun control? Seen anything? Heard anything? Five more high school students were shot this month in an attack in California.

I understand that legislators have met in small groups, to make sure background checks for gun control extend to everyone. However, Senate Majority Leader Mitch McConnell has refused to hold a vote on a House bill passed last February for universal background checks.

Too many are dead.

Many of us immigrants (unless you are a Native American) will sit down at a table on Thanksgiving Day. After the turkey and pumpkin pie, let's send off a pointed reminder to our representatives that we vote and we want control of deadly guns before Christmas, a time of peace. Stop the talking. Start the voting and get back to business. 2019 is almost over with nothing but more deaths to show for it. Sad.

A recent letter writer stated he is a supporter of our “president” and that politicians supported by liberals will “destroy our country and plunge us into unsustainable debt.”

The level of debt that Trump has put our country in is a new record and is pushing the USA toward bankruptcy, a business practice he is an expert in. This level of debt will ruin our children’s future.

Trump isn’t destroying our country? Hate crimes are up. Our standing in the international community is a joke. The divide between rich and poor is growing at an unprecedented rate. Racism is increasing. Promised jobs such as coal mining have not returned and will not, ever. Dishonesty in our leaders is now the norm, etc.

If we have to suffer

another four years under Cadet Bone Spurs, I doubt our country can survive.

Lies for Trump, shame for families?

There is something to be said about the singular ability members of the Cult of Trump seem to possess. They might squirm internally, but they can lie with a straight face as they come up with ever new defenses for the criminal they put into the White House.

There is no smile as the words come out, though they know those words are not true. Each revelation brings forth another excuse without even a second of additional deliberation. One must say well done, for the cause.

I wonder what it does for their lives as they abandon all tenets of what used to be their party. In the end, they all go home and face a mirror. Their behavior is chosen. No one is holding a gun to their heads. The consequences will remain with them for the rest of their lives. How sad for them and the reputations their families will have to live with. I can just imagine that someday one of their grandchildren will face the issue in shame that Grandfather was one of the conspirators who stood with Trump and Putin against our Constitution. He was a traitor to America. How shameful that will be.

Faced with an onslaught of hard evidence of the quid pro quo campaign against Ukraine, Republicans are countering that President Trump was simply interested in fighting Ukrainian corruption, not looking for a political favor that would help him in his 2020 re-election run.

Hmm. Not looking for a favor? The president’s own words tell us that

is exactly what he was looking for in his July 25 phone call with Ukrainian President Zelensky.

According to the transcript, which Trump keeps encouraging us to read, Trump actually said, “I would like you to do us a favor, though.”

This is a dead giveaway about what he was thinking ( mens rea , anyone?) So let’s take him at his word: It was a favor he was after, not an official, legitimate anti-corruption crusade.