Letters to the Editor, Jan. 31

It's time to end the Schiff Sham Show. Pelosi's reasons for impeachment are vengeance and to interfere with the outcome of the 2020 election.

Letters to the Editor, Jan. 31 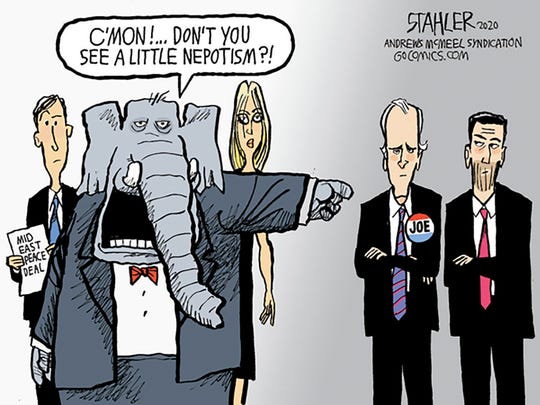 I live in rural Golden Gate Estates off Oil Well Road — which, like Everglades and Randall boulevards, connects to Immokalee Road. On Tuesday, Collier County commissioners signed a death sentence for this unique, diverse community of gated communities and individual homes on 1 to 5 acres.

It is quiet, and wildlife and stars still can be seen. Presently, traffic is tolerable, with no sirens or crime.

I am three streets away from where this fragmented, unstructured approved project Rivergrass would be built. Oil Well Road divides, causing residents to cross a destined six-lane freight road to use the amenities. Their solution: a stoplight.

This project, which is replacing the failed Rural Lands West proposal, will create more congested traffic to the west and cost taxpayers more money on other road projects that will be needed.

Rivergrass would be in primary panther habitat. A speaker showed a map of panther kills in the area. The would-be developer said in meeting that there would be a panther wall and fence.

Our commissioner, Bill McDaniel, and two others voted for approval of the project. Two commissioners — Penny Taylor and Burt Saunders — voted no.

Where are our rights? Who protects us?

Mr. Trump's offenses involve national security, election tampering, and separation of powers. This is too important to ignore any witnesses or documentary evidence.

The consequences of doing anything less could be nation- changing.

Say it in song to your Valentine

On Feb. 12, 13 and 14, quartets from the Paradise Coastmen Chorus again will visit local homes and offices to deliver singing Valentines.

This will be the 20th year the Naples/Fort Myers Chapter of the Barbershop Harmony Society will conduct the project, which benefits the chapter and its various service projects.

For less than the price of a dinner and a dozen roses, you can say “I Love You” to your special someone in a most unique way.

(From the vice president of the Paradise Coastmen Chorus.)

Democrats had their chance?

If Democrats believe they have overwhelming evidence from their witnesses who testified, enough evidence to vote on the impeachment articles, why are they demanding to have more witnesses testify?

Answer: They have zero tangible evidence. Neither impeachment article specifies a crime for impeachment. Now Democrats are demanding the Senate do their job for them.

The House did a lousy job on impeachment. They could have called more witnesses if they wanted. They didn't; now they have no say as to what happens. The Democrats handed in their verdict (impeach) and their case is closed.

It's time to end the Schiff Sham Show. Pelosi's reasons for impeachment are vengeance and to interfere with the outcome of the 2020 election.

Democrats don't have a leg to stand on. Hearsay and presumptions are not proof. Executive privilege is not obstruction of Congress. If it were, every president in history would be guilty. Just ask Obama about Eric Holder and the 'Fast and Furious' hearings.