Kretch’s nudges ahead in co-ed softball

Final three games will be crucial

Kretch’s nudges ahead in co-ed softball 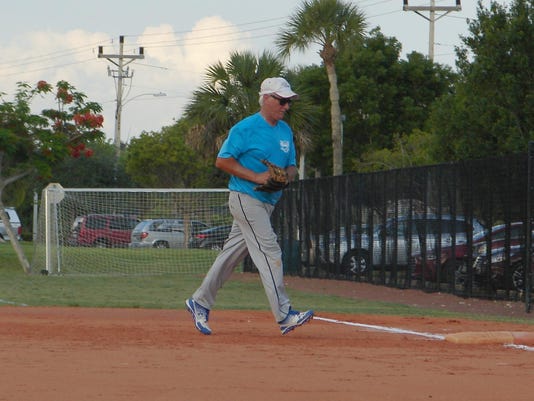 The City team's Bob Lang homes in for a play at base.(Photo: Alex Galiana/Special to the Sun Times)

In last week’s co-ed softball action, Kretch’s took the driver’s seat in its quest to repeat as league champions with its win over Speakeasy by the score of 11 to 2.

Both teams’ records now stand at 5-1-1, but with its victory Kretch’s would claim the crown if both teams finish up with wins in their last three games.

Kretch’s was led by Joe Pitrone’s 3 hits which included a triple, double and single. Santo Gentile, Jenn Mendez and Scott Lien each chipped in with 2 hits each.

Speakeasy really couldn’t get much going at the plate except for Joey & Anthony Irigoyen’s and Selem Lake’s two singles each.

In other games of the night, The City team got its second victory of the season with its 11 to 9 win over Stan’s. The City team jumped out to a quick 6 -0 lead in the first and was able to secure the win with a 4-run 5th inning after Stan’s took the lead in the top half of the 5th - 9 to 7.

Lacking any real big slugger, the City team chipped away and notched its runs with singles, doubles and a walk or two. Zach Simpson, Anthony Chiaradonna and Martha Montgomery each had two hits. Good defensive work in the last inning by Robert Lange and Chris Byrne all helped secure the victory.

Stan’s was led by its big hitters each notching a HR; Lee Burgin, Butch Smith and Brad Frazier.

In final game of the night, the Marco Island Brewery kept up its winning ways and stayed right on the heels of the league leaders with its victory over Davinci’s 12 to 3.

Eddie Kirst and Mike Dechaine each had 3 hits, but it was the contribution of the ladies of the “Brew Crew” that made the difference; Kelly Dechaine, Roe Tamagni, Haley Nadeau and Missy Canady pitched in with 2 hits each. Shawn Lowdermilk led Davinci’s with 2 hits.

With only three weeks left, the race to the finish should be fun so come out and catch the action. Co-ed softball is played every Thursday at Winterberry Field, and games start at 6 p.m.