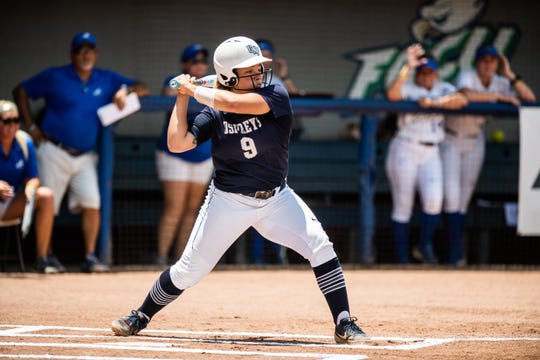 Lely graduate Navia Penrod matched the A-Sun career hits record with 285. She went 13 for 21 in the recent A-Sun tournament, helping the Ospreys reach the championship against Lipscomb. (Photo: Brad Young/Courtesy of UNF)

She just went about doing her business like always, doing anything in her power to help the University of North Florida softball team win.

That determination and skill was on full display during last week’s Atlantic Sun tournament, as the Lely graduate went 13 for 21 – a whopping .619 batting average. The Ospreys (30-24) entered the tournament as the sixth and final seed but advanced to the championship with four wins in six games.

And oh yeah, she matched an all-time A-Sun record in the process, finishing with 285 lifetime hits to tie UCF’s Stephanie Best, who accomplished the feat from 2002 to 2005.

“I’ve never been a stats person, I don’t even really want to know about stats, I just want to produce for my team,” Penrod said. “Before the tournament started, my grandfather (Gregory) called me and asked me ‘you’re ok not getting the record, right? Because you aren’t even close.’ I didn’t know I was actually getting close to it until the game before I did it. I was doing an interview with someone from the A-Sun and they told me.”

Penrod tied Best’s 14-year old record in a 3-1 win over Liberty last Saturday with an infield single to the hole at short, using her outstanding speed to hustle down the line to leg it out. That victory advanced the Ospreys to the championship, where they needed to defeat top seed Lipscomb twice for the championship and automatic bid to the NCAA tournament. Playing their third game of the day due to all the rain last week wreaking havoc with the schedule, UNF fell 8-2 to Lipscomb and Penrod went 0 for 3, her lone hitless performance in the tournament. In the two previous elimination games that day – she went 7 for 8 in wins over FGCU and Liberty.

Penrod has been an impact player from day one, earning second-team all-conference and first-team all-freshman honors in 2016. She garnered first-team all-conference consideration each of the last three years. Her clutch performance last week gained her a spot on the A-Sun’s all-tournament team – the second time she’s earned that distinction.  She finished her Ospreys career as the school’s all-time leader in batting average (.404), on-base percentage (.451), total bases (346), hits (285) and stolen bases (83). She is third all-time in runs scored with 148 – falling four runs shy of the school record. 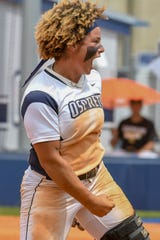 But with everything she’s accomplished in her four-year career, this season and particularly the recent A-Sun tournament served as her proudest moment.

“Going in as the sixth seed and doing the unexpected, we earned so much respect from everyone around the league,” she said. “For me, I had to push outside my comfort zone. I’m normally not the loudest one, I’ve kind of led by example but my coaches and teammates told me I really needed to step up this season and take that leadership role. It really pushed me, made me a better player and a better individual.”

The Ospreys had to scratch and claw just to qualify for the tournament. They needed to win two of three games in the season-closing series against Stetson to make it, and they swept the Hatters in three straight shutouts by a combined score of 16-0.

“I always knew we had this type of run in us,” Penrod said. “Throughout the season, we couldn’t really find our spark, but we hit that spark during that Stetson series. We swept them and I felt we were playing our best softball going into the tournament, so we all figured ‘why not us?’

Penrod has been a special player dating back to her days in the Greater Naples and Gulf Coast Little League programs, and then as a travel-ball player starting at age 12.

She starred at Lely, batting .650 with 10 doubles, 7 homers, 30 RBI and 14 stolen bases as a senior. Those numbers are even more impressive when you consider she had offseason shoulder surgery and missed the first few games of the year.

Former Lely coach Rich Costante was in his first season coaching the Trojans when he saw just the type of impact Penrod had.

“I heard all about how good she was but never got to see it in preseason (due to the shoulder surgery),” Costante said. “What I did see was how amazing she was with her teammates. She took time to help the younger girls understand my style and my drills. She became a fourth coach for me during those weeks.”

Costante also said he ran a softball clinic for the Gulf Coast Little League during that time, where Penrod volunteered her time, helping coach the 8-to-12-year-old girls.

“They all connected with her very well,” he said. “That’s when I knew she was special and someday she’ll be an amazing teacher and coach.”

Soon, Costante would see just how much of a threat she was on the field.

“When we started playing games, every coach we played asked if she was cleared (to play),” he said. “That made me realize she was a difference maker. Then, third game of the year, we are playing Barron Collier. We had just beaten Naples the day before for the first time in about 25 years and (then-Barron Collier coach Tom Resop) asked if she was playing. All I said to him was she wasn’t starting.

Fast forward to the third inning. We had runners on second and third with two outs. Our clean-up hitter Savannah Weiben was coming up. … I knew Tom was going to walk Savannah. I yelled to our dugout for Navia to grab her bat and get on deck. Tom made sure they pitched to Savannah, and she hit a three-run home run. I told Navia to sit down and we never gave up the lead after that. That moment was when I knew what type of difference maker she was … I have coached since 1998 at many different places and ability levels. She is one of, if not the best player I have ever coached.”

An outstanding student, Penrod says she’s applied the same determination exhibited on the softball field to her academic work.

“I don’t like to be outworked at anything I do,” she said. “Getting the (hits) record is a result of that. I try to go the extra mile every day, no matter what it is I’m doing.”

With her softball playing days behind her, Penrod is now focusing on her career. A recent graduate of UNF with a degree in special education, she is pursuing her Master’s degree at UCF via online courses. She hopes to tutor while working on her Master’s, giving her some valuable experience in the field. She hopes to one day work with children in the autism spectrum.

“One of the reasons I chose UNF is it has one of the best special education programs in the country,” she said. “I had offers from several schools in the Northeast and out West, but I’m a Florida girl – I love the hot and hate the cold. Going to UNF allowed me to be far enough away from home to be on my own, but close enough that I could go home for a break if I needed to. I couldn’t have chosen a better school for me, athletically or academically.”