The only noise is when their feet stomp down in unison on the forward thrusts, and the aura of controlled energy and power is undeniable.

Inside “Sensei” Nick Lemke’s karate studio there’s an air of menace. But it’s a quiet, non-threatening menace as a group of his students perform a team exercise with six-foot wooden staffs, thrusting them backwards and forward in simulated combat.

The only noise is when their feet stomp down in unison on the forward thrusts, and the aura of controlled energy and power is undeniable.

Between them, the eight nationals participants brought home six golds and a clutch of silver and bronze medals to once again place the Dojo (and Marco; and the Marco Y) firmly on the national karate map.

“All students trained five to six days a week during the school year, and six to eight hours a day for two weeks prior to the tournament,” said Lemke, whose “Sensei” title means teacher or instructor in the ancient Japanese martial arts.

In the studio, the youngest competitor out of 2,000 athletes from every state in the country, Dominic Scarpa, took time out from practicing kobudo (traditional weapons), kata (lightning fast choreographed moves) and kumite (sparring), to look back on the championships.

“The best part was kata and weapons,” said Scarpa, 5, who participated in the ages 6-7 division because that’s the lowest.

He was a double gold medalist in kobudo and kata.

And why the interest in karate, and at such a young age?

“It gives you the basics to protect yourself,” said Scarpa. He agreed that discipline is also key in the sport.

Gold (kumite) and silver (kata) medalist Chase Polley, 11, admitted to being a little nervous before his appearances.

“I warmed up in the staging and practice area,” said Polley, who’s been with Lemke for the past six years. “That helped.”

His haul of medal sure underlined that. 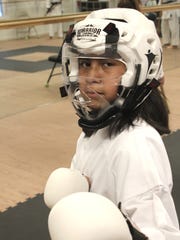 Leah McCardle is kitted out for sparring (kumite) at the Shima Dojo Karate School at the Marco Y. (Photo: Submitted)

Martinez was full of praise for Lemke and his commitment.

“He’s a good teacher, and he makes sure you learn everything,” Martinez said. He added that his favorite discipline is kata, because “it makes you feel like you’re fighting.”

Lemke launched the school in 2010, and offers classes at all levels for students aged 6 to adults.

He has studied karate for nearly a quarter of a decade, some of which has been in Okinawa, the island about 400 miles south of Japan, and the “home base” of karate.