While we can’t grow tulips or any of the other northern bulbs here in Florida, we do have other bulbs that like our tropical climate. 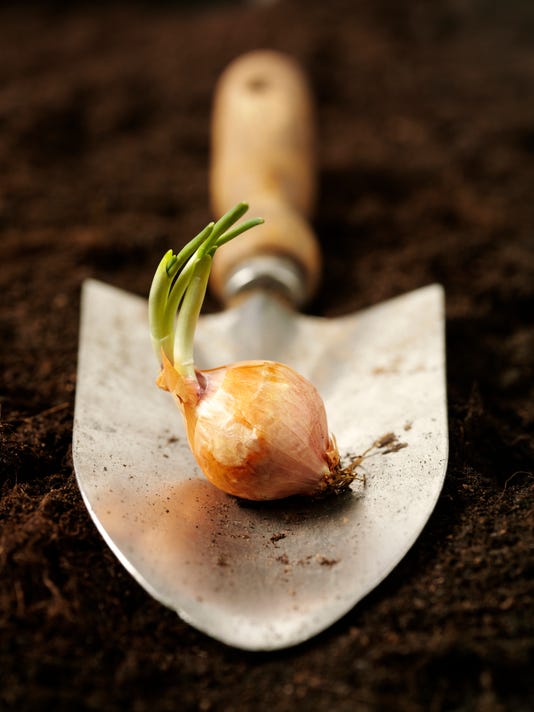 In the northern states the tulips and daffodils are popping out of the ground and opening, bringing a splash of color to the drab, winter landscapes and providing some much needed brightness. While we can’t grow tulips or any of the other northern bulbs here in Florida, we do have other bulbs that like our tropical climate.

Amaryllis is one of the most beautiful bulbs we can grow here in south Florida. They come in varying shades of pinks and reds. Most of the year, these bulbs have pretty green leaf-like foliage in the garden. Bulbous plants will thrive and produce these beautiful flowers year after year with proper care.These plants have thickened underground storage organs which enable them to survive unfavorable environmental conditions. These underground organs are also the propagative units of the plants.

Not all bulbous plants are true bulbs. Other underground storage organs include corms, tubers, tuberous roots and rhizomes.

A true bulb is a compressed stem or basal plate bearing a flower bud enclosed by thick, fleshy scales called bulb scales. Some true bulbs such as narcissus, amaryllis and tulip are protected from drying and mechanical injury by dry and membranous outer scales called a tunic. Other true bulbs such as lilies are called non-tunicate or scaly because their outer scales are succulent and separate, giving the bulb a scaly appearance.

A corm is a solid mass of stem tissue with a terminal bud on top. Axillary or lateral buds are also produced at nodes on the corm. The solid stem structure of the corm is protected against injury and water loss by dry leaf bases that are similar to the tunic that encloses true bulbs. Gladiolus is a cormous plant.

A tuber is a thickened underground stem with many buds on its surface. Tubers are covered with a tough skin rather than a tunic or scales like true bulbs and corms. An example of a tuber is a caladium.

Tuberous roots, such as dahlia, are true roots and lack nodes and inter-nodes. Buds are present only at the crown or stem end of the root.

Rhizomes are thickened horizontal stems growing along or below the surface of the ground. Underground rhizomes of canna and calla produce roots on their lower surface and send shoots above ground.

Florida's climate is favorable for growing many tropical and subtropical bulbous plants. Unfortunately, many of the common bulbs of northern states such as tulips, hyacinths and daffodil do not grow well in Florida. These bulbs flower poorly or not at all. With special treatment many of these northern bulbs will grow and bloom the first year. Recovery and planting the following year is not recommended since they rarely flower again.

Most bulbs thrive in a sunny location. Some, such as caladiums, do best in partial shade. Heavy shade should be avoided as it will cause thin spindly growth and poor foliage color and flowering. Bed preparation is important for successful bulbs. A well-drained soil is also important. You should till and amend the soil with three to four inches of organic matter and fertilizer.

Dig holes to the recommended depth for the various bulbs and plant with points facing up. Firm the soil around and over the bulbs and water.

Mulch the beds to control weeds. Weeds that do grow through the mulch should be pulled before they become firmly established in the bed.

Fertilize once or twice during the growing season with a special bulb fertilizer. Bulbs such as tulips, which are discarded after flowering, do not need fertilizing since they have enough stored food to last through the blooming period.

Water is crucial when growing bulbs and it is important that they not dry out during growth and flowering. Keep the soil moderately moist at all times except when drying off at the end of a growing period.

A good cultural practice is to remove dead blooms before seeds are produced. Flowering in the following season will be reduced if seeds are allowed to set. Removing seeds also adds to the aesthetic value of the planting and may prevent disease problems.

Many bulbous plants grow best if left in the ground year after year while others may become crowded and bloom poorly. Digging and replanting encourages more uniform and larger flowers.

True bulbs, like amaryllis and hyacinth, develop miniature bulbs known as bulblets, which grow into offsets. Offsets can be separated from the mother bulb and replanted into the beds. Depending on the kind of bulb, it could take several years before they reach flowering size.

Corms, such as gladiolus, produce new corms on top of the old corms, which wither. Miniature corms, called cormels, are produced between the old and new corms. These can be separated from the mother corms and stored along with the new corms over winter for planting in the spring. Cormels also require two to three years to reach flowering size.

Tubers (caladiums), tuberous roots (dahlia) and rhizomes (canna, day lily) are propagated by cutting them into sections with each containing at least one bud. Tuberous roots that are broken off without a bud are worthless.

Bulbous plants can be moved anytime except when they are in bloom.

Some examples of bulbs, corms, tubers, tuberous roots and rhizomes and their flowering seasons:

Eileen and Peter Ward have owned a landscape and lawn maintenance company for 35 years. Eileen can be reached at Gswdmarco@comcast.net or 239-394-1413.