Generally, the tragic red tide and algae conditions that were faced over the last couple months are abating. 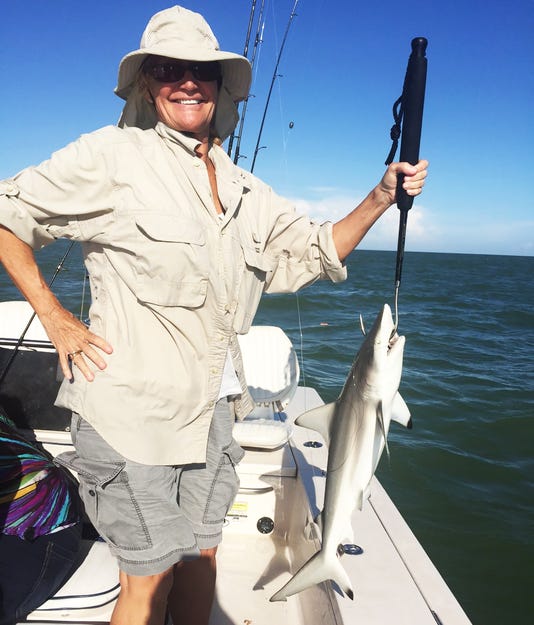 Vicky Richmond with a 2.5 foot blacktip shark she caught on Squid in Marco Island. (Photo: Submitted)

Generally, the tragic red tide and algae conditions that were faced over the last couple months are abating. Rather consistent easterly winds and the seasonal reduction in water temperature are likely the primary causal factors.

In any event there has been a definitive move towards traditional fishing conditions. Say that with tongue in cheek as we now experience the treats of potentially threatening tropical storms, potential hurricanes coursing our way across the southern Atlantic pose a potential impact on rather docile conditions here now; of the three storms putting themselves together, only one, Isaac, holds a late week potential for winds and outfall rains and winds.

Thankfully, not likely direct hits, but certainly worthy of monitoring. Otherwise our fishing “arena” this week should be favorable with light winds and just a smattering of late afternoon thunderstorms which will prove to be annoying but not shutting down the fishing. The tides are reasonable both ways but with enough “steam” to keep the favorable current on the move. The water temperature is following the seasonal format and are holding in the “fall like” 82-84 degree range.

Marco Island: Conditions generally clean back here; generally looks like traditional early fall conditions and producing catches equal to that. Water is clean and the detested grass and algae remnants have vanished. With conditions favorable, the larger late season mangrove snapper are fully cooperating. Those endless summer days when the small snapper catch just emptied the bait bucket are gone; chance now are for nice 12-14” mangroves heading to the cooler. You’ll also find some early season redfish along those mangrove edges as the high tide reaches max taking freelined shrimp worked tight to the overhangs. Pompano and a few mackerel are also active in the Passes on the first part of the incoming working a tipped jig to the bottom.

Naples: Snook action is the by-word here. With excellent coastal and connecting waterway conditions, snook probably maintain maintain a presence here more than other locales and is the primary target in the fall. Of note now is the fact that the authorities have restricted the retention of snook north of Gordon Pass but that leaves the south portion of the ICW and connecting creeks and bays as prime opportunity for catch and (hopefully) release. Pilchards are the primary bait and this week’s early incoming tide adds to the potential opportunity. Elsewhere, there is notable opportunity for spec trout all along the north edge of Canon Island and fair to good redfish action on the Rookery Bay flats on incoming with pilchards post shower.

Bonita Springs: The beginning of recovery here. Finally seeing bait showing along the edges where current has cleaned water. Still the area north towards Malatcha has scattered action. Good news south that small tarpon are showing and feeding especially on the incoming tide. Jacks are everywhere as the ultimate opportunists and taking whatever bait offered. Snook out along the edges of the Carlos / New channels and falling for pilchards post shower early on the incoming. Still slow on trout circa Mound Key but improving.  Area is improvement in action; back to normal one to two weeks.

Marco Island: Conditions here improved over backwater. Water clearing quickly. Not quite back to norm but closing in quickly. Major reefs i.e. Walton Reef, Five Mile and John Dee have bait and drawing pelagics and bottom feeders. Up top it’s working tipped jigs tight to a good chum slick for mackerel, blues and associated (jacks, runners etc). On the deeper reefs that have held bait through the water quality dilemma, better and better action on top water mackerel and blues and a couple Little Tunny working weighted jigs on wire under a good chum effort.

Naples: Water quality has now been a problem here for awhile. Bait has withdrawn thus having the predators also vacate the premises. Things changing as we speak as now beginning to see mackerel working the waters between the Pier and Doctor’s Pass. Bait is very evident both is surface action and birds being attracted. Offshore different story. Sustained good action of wrecks holding bait on malingering kingfish and a few cobia. All taking live bait under chum.

Bonita Springs: Good action here on pelagics has been sustained during the inside water dilemma. Never had the infiltration of killing circumstances deep. Red grouper and some gags will a good bet working 60-65’ hard bottom with live pinfish towed tight to the bottom. Multiple reports that red grouper will take the deep bait and gags will go for baits run 20-plus feet above the bottom intwined in reefs.