An associated factor for the overall improvement in our area is the consistent East and Southeast winds. 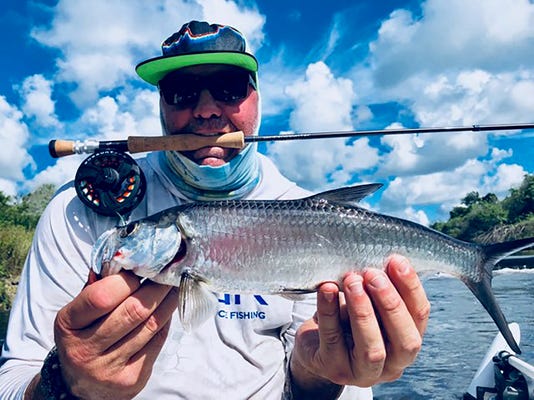 Capt. Rik Treamer sharing one of his Ten Thousand Islands tarpon catches. Treamer caught it on a fly rod and released it alive after a quick snap. (Photo: Submitted)

General observation this week is an uptick on air and water temperature throughout Southwest Florida as well as a continued progress on the abatement of red tide and algae laden conditions that plagued the area for the last six months. There still exists some differential in the degree of abatement however, with the southern areas faring a bit better than the areas circa the Caloosahatchee outflow. That area is somewhat affected by the fresh rainwater releases from Lake O.

An associated factor for the overall improvement in our area is the consistent East and Southeast winds which pushed the tainted water offshore; hopefully far enough now to give us good clear conditions super deep. The general weather for the week will be a continuation of the unremarkable early fall conditions except for a moderate frontal passage Monday through Wednesday which will deliver some gusty easterly winds.

The spotty p.m. rains will continue and help keep the water temperature “moderate” in the 82-85 range most of the week. The tides will be kicking up off a new moon on Tuesday with a balanced strength both ways.

Marco Island: The theory advanced here the last couple of weeks that many fish relocated to cleaner water in the past months of fouled conditions is really starting to show up along the Marco Island to Naples waterways and islands. Bait, in goodly numbers, are working the current flows along the shoreline and the backwater cuts. Mangrove snapper, sustained by the super warm water temps, are thick along most mangrove edges Rookery Bay, Addison Bay and along the ICW islands. Shrimp on a half-ounce jig head is the key. Also seeing sustained snook action south of the island (Kice Island, Cape Romano) and the early morning incoming produces a super situation. Pilchards worked to current points post shower.

Naples: Fall means redfish action and it’s evident all along the ICW between markers R#40 and R#68 working creeks and cuts with best a high water tight to the mangrove overhangs with a shrimp on a 4’leader under a popper. Snook are also still in play all along the south edges of the Gordon Pass to the ICW junction; on pilchards post shower. Good reports of steady action on pompano on both tides in Hurricane Pass working small tipped jigs or lindy rigs just off the bottom on a drift. Back to the belief of conditions forcing fish “relocations” … reports of 20-plus flounder and good size black drum east of Keewaydin edges.

More: On The Hook: Keeping credibility in sport fishing