Would quickly say, after retrieving the week’s forecast, that this is truly the first week of spring here in Southwest Florida. 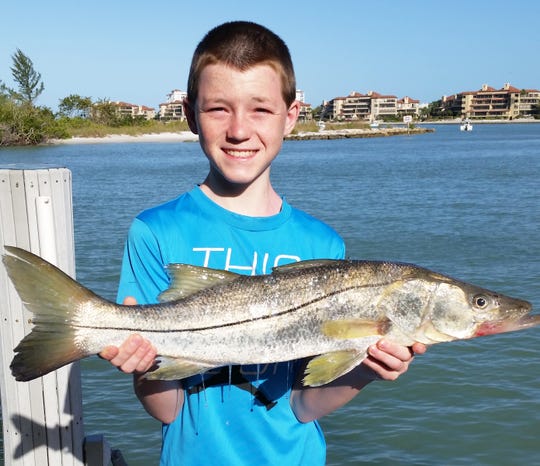 Sean Gregorius, a 12-year old visitor from Wisconsin, caught this 29" snook off the docks of Collier Creek. (Photo: Photo provided)

Would quickly say, after retrieving the week’s forecast, that this is truly the first week of spring here in Southwest Florida. Stable conditions with afternoon air temperatures that tickle the mid-80s from noon till late afternoon. For the spring “breakers” and the tourists, that is nirvana. For the anglers, it presents a new weather frontier. Do the west winds in the afternoons cause a deterioration in the water quality? Will the temperature advancement change the mix of species on the hunt? Guess we have to plan for the best but be ready for some problems.

I would guess that the air temperatures will drive the water temperatures into the low 80-degree range by late week. That could well trigger a mass action on mackerel, bluefish and jacks to be moving closer inshore and well into the backwaters. But conversely, could send the last of the late spawning sheepshead west to cooler waters. So, so we’ll have to wait and see how it plays out. There is zero rain in the weekly forecast and the tides are moderately friendly with an early morning low tide and a good but moderate incoming until early afternoon and then a bit stronger ebb in the afternoons but nothing that will close down the fishing; all in all should be a breakthrough week of spring fishing here on the Paradise Coast.

Marco: Should be a different week; the water’s warmth is definitive and will draw the spring, early summer action in the passes and the backwaters. Look for water temperature by midweek to be just below 80 degrees and the start of scatter bait all through the passes and drawing “everything” – ladyfish, jacks and runners at the bottom end of the scale and (hopefully) pompano, mackerel, bluefish and little tunny at the top. In the deeper backwaters, the mangrove snapper will take precedence closely followed with juvenile redfish, sizable black drum and take-home mangrove snapper.

Naples: Look for solid action this week just off the west side of Gordon Pass and into the Gordon River for snook action with best first light a.m. action working pilchards tight to the south edge rip-rap. Light boat traffic will be a blessing early. Mid-morning would suggest working Rookery Bay’s Henderson Creek area for redfish as the a.m. incoming tide matures and try whole live shrimp on a four-foot leader worked tight to the mangrove overhangs. Late morning, early p.m. outgoing best might be action on pompano in Hurricane Pass working small white tipped jigs to the bottom on a drift in the pass.

Bonita Springs: Water is staying clean – no Lake O discharges. Good action Estero mid bay on mangrove snapper working edges on the morning incoming with shrimp tight to the overhangs. Try north to Matlacha for super redfish action, albeit mostly on juvenile reds. Great action on tenacious little reds on shrimp under popper with circle hook to enable safe release. Good action continues circa Mound Key for trout working the area of bars and edges of reefs where grass bottom is evident with shrimp under popper on an incoming tidal drift.

Marco Island: With water warming quickly this week suggest you work the inshore reefs (i.e. Walton Reef at Caxambas) and the first and second reefs just offshore for mackerel, bluefish on the morning incoming tide. Bird action will be the key to the action spots. If at anchor and chumming best would be tipped jigs with wire leader worked tight to the surface. Offshore pelagic action will be the target. Target wrecks, reefs that are showing bait on the finder and work a blue runner on wire tethered at a 15-20’ depth in a good chum effort on one of the moving tides.

Naples: Reports of good action on east edges of the Gordon Five Mile Reef for mackerel up top and lane and mangrove snapper deep. Flashy tipped jigs for the macks and weighted tipped jigs under chum for the snapper. Deeper wrecks in the 10-20-mile range beginning to see migrating kings and cobia showing. Kings on tethered blue runners set at 15-20’ in chum on wrecks with good bait presence. Cobia will show on surface in slick and best worked with a small live bait (threadfin or pinfish) worked with cast directed to cobia surface presence.

Bonita Springs: Tarpon showing early circa Big Carlos and taking threads, pinfish worked on the late morning incoming tide. Some tarpon to mega size already; use upgraded tackle. Nearshore action on the reefs for mackerel working top water, first with chum to draw and then with tipped flashy jigs worked on the surface for nice size mackerel and some bluefish. Deep want to work the last weeks of the stone crab markers for resident tripletail hanging on those markers and taking tipped jigs worked right on surface. Use mid-range tackle; the TT are of some size now.

More: On the Hook: Catch and release – something to consider