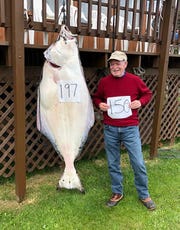 Carole Roberts writes, "Marco resident Steve Roberts caught this 197 pound halibut in Kodiak, Alaska. It took Steve 25 minutes to bring in his very large fish. Steve was vacationing this week with his family at the remote Port Lions Fishing Lodge in Kodiak. Steve was able to bring home 90 pounds of flash frozen fillets of halibut, salmon, ling cod, and black rockfish. I am the proud wife who will be eating great fish for months to come!"  (Photo: Photo provided)

Typical summer weather pattern well in place here now. Very predictable with storms early and late and searing heat in between. You’ll note that there is almost no mention of “fronts” which the fall and winter weather drivers are here and that all replaced by the tropical patterns of heat generated storms. Such will be the case this week. Look for periodic storms emanating both early and late with plenty of loud (and dangerous) lightning that immediately disrupts the fishing trip and scatters the fleet. Many of those storms are not in the forecasts, so diligence and having a cell phone or tablet aboard displaying current weather conditions is a smart way to go.

More: On the Hook: Fishing and the cellular snare

These storms, at times, are moving at 20/30 mph and that’s tough to outrun if you have distance to go. This week’s predictions are right in lock-step with what we’ve seen here over the past month. Mornings in the high 70s that will escalate to the high 80s by late afternoons and deliver a baking circa 100 degree real feel. The winds will be single digit except in those storm cells and the “lack” of even a breeze during the day tends to add to the searing heat level.

The water temperatures will continue to hover between 86 and 90 degrees and you can add a couple degrees in the backwaters. The tide is coming off a notable full moon. We mentioned last week that the outgoing tide was remarkably strong 4 to 5 foot on the afternoon outgoing and that “avoidable” issue will carry through this week until Wednesday. That water velocity is extreme and will negatively impact fishing quality.

Marco Island: Conditions have been more favorable in drawing bait just about everywhere. Reports throughout the Marco and adjoining waters call the intensity of bait action remarkable and that draws your fish. Key marker now before you anchor is the presence and activity of bait showing in the now clearer water. Snapper are ravenous feeders and will hover on the bait fish and your offering. Seeing nice 11-13” snapper in places like Hurricane Pass, Addison Bay and Rookery Bay all on rigged shrimp. Snook active from Kice Island to Keeywadin with best in passes. Redfish action reported excellent in Upper Addison Bay on top of tide.

Naples: Rookery Bay flats have been a hot spot especially with these high tide periods in cooler part of the p.m. with nice size redfish being the action working select shrimp on 4’ fluoro leader under popper. Those making the run early morning to the west edges of Kice Island are rewarded with nice smaller snook action on pilchards with a few pompanos mixed in. Hurricane Pass along the eastern edge tree line has seen solid action on nice size snapper taking small shrimp worked on a #2 circle with incoming best. Same venue early (first light) tight into south end Keeywadin Beach edges for whiting to 12-14” on tipped weighted jigs.