Maybe a good idea to take “climate change” for real after looking at the conditions and temperatures this week here on the Paradise Coast.

Maybe a good idea to take “climate change” for real after looking at the conditions and temperatures this week here on the Paradise Coast. Here we are in mid-January and our morning temperatures are forecast at mid-70 degrees and the all the late afternoon will be in the mid-80s; that’s really some change.

More: On the Hook: What gets in the way of fishing fun

I’ve been doing these fishing reports for some 15 years, the norm back then was high 50s overnight and barely reached 65 late afternoon. No wonder the fishing pattern has changed so dramatically. And this will be a banner “tourist” week with lots of sun, no rain and sunny skies. But not so good for the folks with rod and reel in hand. 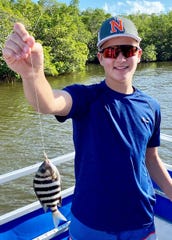 The species of fish that depend on temperatures and bait movement to start the feed and the life cycle will be confused (again). For the pelagics making that long run to the Keys, it will hardly seem worth it; but what about their food? Will the pelagic runners, jacks, mullet, etc., hold here to feed them? Tough question. And how about the cold water species (sheepshead, drum, trout) who will make the move inshore to feed on “what” as they prepare to spawn? So, conditions will drive this winter season. Best narrative would be a distinct drop in temperature in late January and an infusion of winter time bait schools arriving along with the traditional mackerel bite and the migration inshore of the mega sheepshead, drum and trout.

Marco Island: It’s all going to depend on water temperature as these winter weeks kick in. As a positive, we are still seeing mangrove snapper, pompano and some permit in the backwater bite. But the absence of the 18” lunker sheepshead is among the missing and that’s what our anglers are used to this time of year. Thankfully however, the summer and fall species have hung around and the trophy redfish and snook are in the bite circle. How long that will last is dependent on their comfort level with the strange water temperature cycle. The concern for those used to winter fishing here is that’s it out of cycle.

Naples: Should be a tad better acceptance of radical weather pattern in Naples. With the thriving “warmer water” fishery along the Gordon River can still anticipate great action on the redfish and snook action that will hold in the marginally cool water. There will be some letdown among anglers working the traditional super action along the Keewaydin docks for those monster sheepshead, trout and drum. And warm water has been holding the mangrove snapper all along the edges of Hurricane Pass. -so not all will be lost, hopefully.

Bonita Springs: The consistent clean (no fouled water conditions) is paying off for the folks north of Naples. Multiple reports of not only of good reef action but seeing the first signs of breeder sheepshead action to 17” in the backwaters just south of Big Hickory working cut shrimp into structure. Yeah, so the bite is there it just has to spread south in a little chiller water. Also, good action on the inside reefs off Carlos Point for mackerel with some pompano and permit in the mix. Redfish action still top drawer in the area of the Matachala Bridge taking whole shrimp under a popper best on incoming tide.

Marco Island: Although slow action beginning to see the winter size sheepshead on the Five Mile Reef and on the Walton Reef adjacent to Caxambas Pass. Best timing is the a.m. start of the incoming tide. Either cut fiddler crabs or live shrimp for bait. Stone crab markers have “matured” and have couple reports of good action on tripletail in the 18-22” range from boats working the 30-35’ depths on either tide where water is remarkably clean. Red grouper still scarce but some reported fair action on gag grouper in the structure in the 50’-plus range taking live bait, jointed plugs on a slow troll tight to the edges.

Naples: Close inshore have sustained action between Gordon and the Pier on smaller mackerel on tipped jigs on wire under a good chum effort. Best on the a.m. incoming water. Seeing an early appearance of sheepshead now on the east edges of the Gordon Five Reef working cur fiddlers or fresh shrimp worked tight to the bottom with a soft lift technique. Super deep some limited action on gag grouper on deeper structure with elevation on live bait on a deep troll. Same domain for sunning tripletail as the fauna formed on the markers matures. Tipped jigs and light tackle here.

Bonita Springs: Entire area from Lake O gates to Sanibel and beyond enjoying a banner season. Water clean and unfocused drawing great action on fall and early winter species. Seeing good sheepshead action all along the coast well into Estero Bay. Reported action on bigger sheepshead all along the east edges of Big Hickory taking bottom baits on a soft lift technique on either tide on numerous reports. Some pompano showing in the Carlos Channel on the a.m. incoming tide working tipped jigs just off the bottom before late morning heavier boat traffic spoils the conditions. Deep look for scattered red grouper in 60’ plus water working the bottom.