Francis Rooney is urging the federal government to pay for the next part of a project elevating the Tamiami Trail in the Everglades so water can flow south.

Built in the 1920s, one of the unintended consequences of the cross-state highway is that it effectively dammed the natural flow of the River of Grass, the largest wilderness area in the eastern United States . (Farther north, the Naples-Miami portion of I-75 known as Alligator Alley was engineered to include culverts for water and wildlife.) 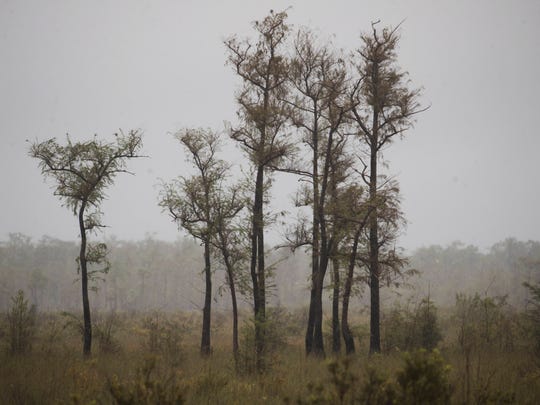 A cypress stand is seen off of Tamiami Trail in the Everglades. The eye of Hurricane Irma raked over this area.  (Photo: Andrew West/The News-Press)

Now, Rooney, R-Naples, wants Phase 2 funded. Earlier this week, he wrote to U.S. Department of Transportation Secretary Elaine Chao asking her to fund the $100 million project. Getting it done is key to Everglades restoration, which hinges on water from the north making its way into the Everglades and Florida Bay, “where it is desperately needed,” Rooney said.

Matthew Schwartz, executive director of the nonprofit Florida Wildlands Association, seconds that. “The park is not doing well at all,” Schwartz said, because it’s water-starved. “The ecological heath of Everglades National Park is to a large extent dependent upon how much water flows under the Trail and into the park.”

In the past year, Schwartz has witnessed alarming changes: Mangroves marching north from the coastal fringe into what had been marshland, tree islands dying and Florida Bay, into which the Everglades should flow, instead turning an opaque, pea-soupy green.

It’s all tied to the lack of water, Schwartz said. If the destruction continues apace, the consequences will be dire, he warned.

Rooney pointed out the Everglades have a $2 trillion impact on Florida’s economy. “It is vital that South Florida’s ecosystem is restored to its natural state, and that starts with water flow.”

Marisa Carrozzo, the Conservancy of Southwest Florida's environmental policy manager, agrees. "One of the critical elements of Everglades restoration is removing barriers to freshwater flowing south ... in conjunction with other storage and conveyance projects like the Central Everglades Planning Project and Everglades Agricultural Area reservoir," she wrote in an email.

In the past, the Miccosukee Tribe has been consulted about such major Everglades restoration projects, but so far, has not been asked for its opinion, said tribal attorney Jeanine Bennett.

Work progresses on a Tamiami Trail bridge that was recently built over the southeastern Everglades near Shark Valley. Water is being released in this area to relieve flooding across the region. (Photo: Andrew West/The News-Press, Andrew West/News-Press)

“The council hasn’t been given the opportunity to write a position specifically on this matter,” Bennett said. “There has been no formal consultation on the matter (but) there is a government-to-government consultation requirement with the tribes in the area.”

The state of Florida recently proposed pitching in $40 million to this project through the state's Department of Transportation’s work program in Governor Ron DeSantis’ 2019-20 recommended budget. So far, nearly $1.1 billion has been appropriated for Herbert Hoover Dike repairs and Everglades restoration projects in fiscal years 2018 and 2019.

“Restoring flow requires completing all elements of the Central Everglades Planning Project,” Rooney wrote in an email. “The EAA reservoir, removal of the C-67 canals, the U.S. 41 bridging project and removal of the old roadbed- so that flow will be increased and directed easterly across a wider segment of the Water Conservation Area and Everglades National Park.”

More than transportation, the Tamiami Trail opened real estate sales; would-be buyers could learn about opportunities at the six way stations that lined the route across the Everglades. Special to The News-Press (Photo: The News-Press archives)

Even with all the moving parts, Rooney, who’s emerged as a champion of south Florida’s water quality and natural systems, remains optimistic.

“This administration has demonstrated its appreciation of the importance of the  Everglades watershed and its ecological and economic importance to Florida,” he said. “In addition to the nearly $1.1 billion we received in the 115th Congress, the president has personally pledged to get us the $200 million we requested for 2020 appropriations, and the House Appropriations Committees are supportive as well.”

In the past, federal and state agencies have been under court order to make sure water entering the park met stringent quality standards of 10 parts per billion of phosphorus, a fertilizer that can cause nuisance plants to take over.

Schwartzsaid it’s time to rethink that.

“At this point, our feelings about that are, the park is in such bad shape hydrologically, they’ve got to lighten up on the water quality standards … You need fresh water. It’s got to happen. You can’t starve the park for water and say, ‘No we don’t have exactly the right parts per billion phosphorous.’ No. The water has to get into the park as soon as possible.”