Act proposed by Republican U.S. senators Marco Rubio and Rick Scott would help identify, target, and eliminate invasive animal and plants in the River of Grass

Burmese pythons are taking over the historic Everglades. Hunts are held regularly, but the number of snakes removed is not on pace with the rate at which the snakes are spreading. They compete with and prey on native species.

The catchy acronym is a nod to one of the Everglades’ big problems: SLITHER – as the giant Burmese pythons that have invaded the River of Grass do.

But specifics about the act, proposed by Republican U.S. senators Marco Rubio and Rick Scott so far remain as elusive as the giant Southeast Asian reptiles wreaking havoc on the Everglades.

It stands for Suppressing Looming Invasive Threats Harming Everglades Restoration, and according to a release issued by Rubio’s office Wednesday, “authorizes and directs the South Florida Ecosystem Restoration Task Force to develop innovative technologies and approaches to identify, target, and eliminate invasive animal and plant species that threaten Everglades restoration.”

You won't want to miss this: 'This is my calling.' Everglades python hunter brings her passion to bear in fight against invasive species 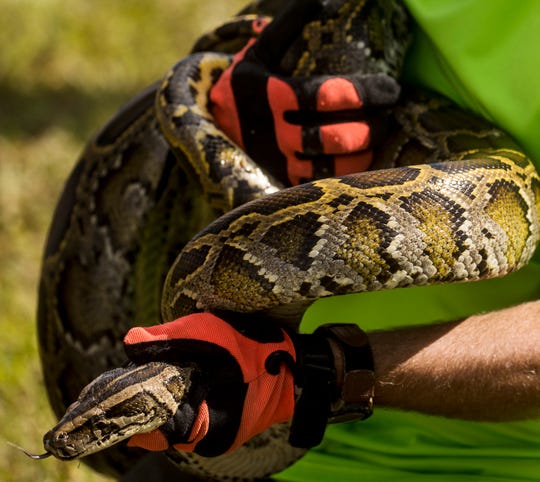 These wild burmese pythons were used for a training session on how to capture pythons in the wild. The session is held by the Florida Fish and Wildlife Conservation Commission at Citrus Park in Bonita Springs. Several residents from the park are going on a hunt Friday to kick off the 2020 python bowl. The invasive species are taking over the everglades and efforts are underway to eradicate them.  (Photo: Andrew West/The USA Today Network, The News-Press)

The release didn’t outline how the act would work, who would carry it out or how much it would cost. Emails and calls to the senators’ offices asking for details were not immediately returned.

The fact that the bill itself doesn't give explicit directions to the task force doesn't trouble Shannon Estenoz, COO of the Everglades Foundation and its chief operating officer. She's just happy the senators are weighing in with more support.

"invasive species are really important, I think the government has some really good people working on it and I'm really grateful to those senators for paying attention to it and wanting to empower those folks even further."

In the release, Scott points out that invasive species can jeopardize the success of past Everglades restoration projects.

“We’ve successfully fought to fund projects that preserve and protect our Everglades, including repairs to the Herbert Hoover Dike and the EAA Reservoir, but this incredible progress is threatened by invasive species,” he said. “I’m proud to join Senator Rubio in introducing this legislation to combat this threat to our environment, and protect Florida’s natural resources for future generations.”

In Photos: Citrus Park residents in Bonita Springs get hands on training on how to catch pythons

These wild burmese pythons were used for a training session on how to capture pythons in the wild. The session is held by the Florida Fish and Wildlife Conservation Commission at Citrus Park in Bonita Springs. Several residents from the park are going on a hunt Friday to kick off the 2020 python bowl. The invasive species are taking over the everglades and efforts are underway to eradicate them.  (Photo: Andrew West/The USA Today Network, The News-Press)

Even so, any help in fighting the massive problems the system faces is more than welcome, said Randy Smith, spokesman for the South Florida Water Management District, an agency that’s one of the major players in Everglades restoration.

“This is really good news because we do have a serious problem, and it’s going to be nearly impossible to restore the Everglades with an existing issue like the pythons that can’t be controlled,” Smith said. “So any efforts to enhance what has already been a very successful program – any additional funding or support of any kind is absolutely welcome and necessary.” 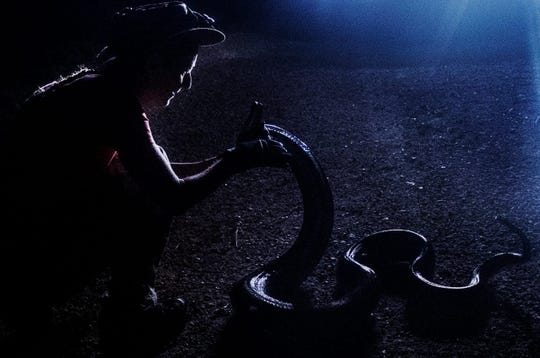 Donna Kalil captures a Burmese python in the Everglades west of Homestead. The invasive snakes have taken over parts of the Everglades. The state is trying to eradicate them with hunts and other means.  (Photo: Andrew West/The USA Today Network, The News-Press)

The snakes, just one part of an invading army that includes aggressive plants like Brazilian pepper and melaleuca, escaped int the Everglades decades ago and now number in the tens of thousands, scientists estimate. They've devastated the system: More than 90% of mammal populations in the Everglades have declined since the snakes moved in, research has shown.

That means less food for native predators such as bobcats and the endangered Florida panther.

The federally created task force gathers government agencies such as the water district, the U.S. Army Corps of Engineers, U.S. Fish and Wildlife Service and others involved in Everglades restoration, which is “critically important to the State of Florida,” Rubio said in the release. “This will not only promote ecological health, it will also make it easier to measure the progress of state and federal investment in Everglades restoration. I remain committed to fighting for legislation that protects, improves, and restores Florida’s water quality and environment, so that Florida’s ecosystems can be preserved for generations to come.”